“It’s my trainwreck and I love it!” – talking past, present & future with Ibrahim Ahmad

Six months ago when the lockdown wave hit Berlin and therefore jovoto HQ too, we decided we wanted to run a project in which we could reach out to you, our community, and give you a space to share a little something about yourselves or anything else you felt like sharing. The Community Connect project was born and we really enjoyed seeing all your submissions and getting to know you better. The three most intriguing submissions were awarded with a Creative Spotlight feature and first up is: Ibrahim Ahmad who wowed with “Past, Present, Future.” 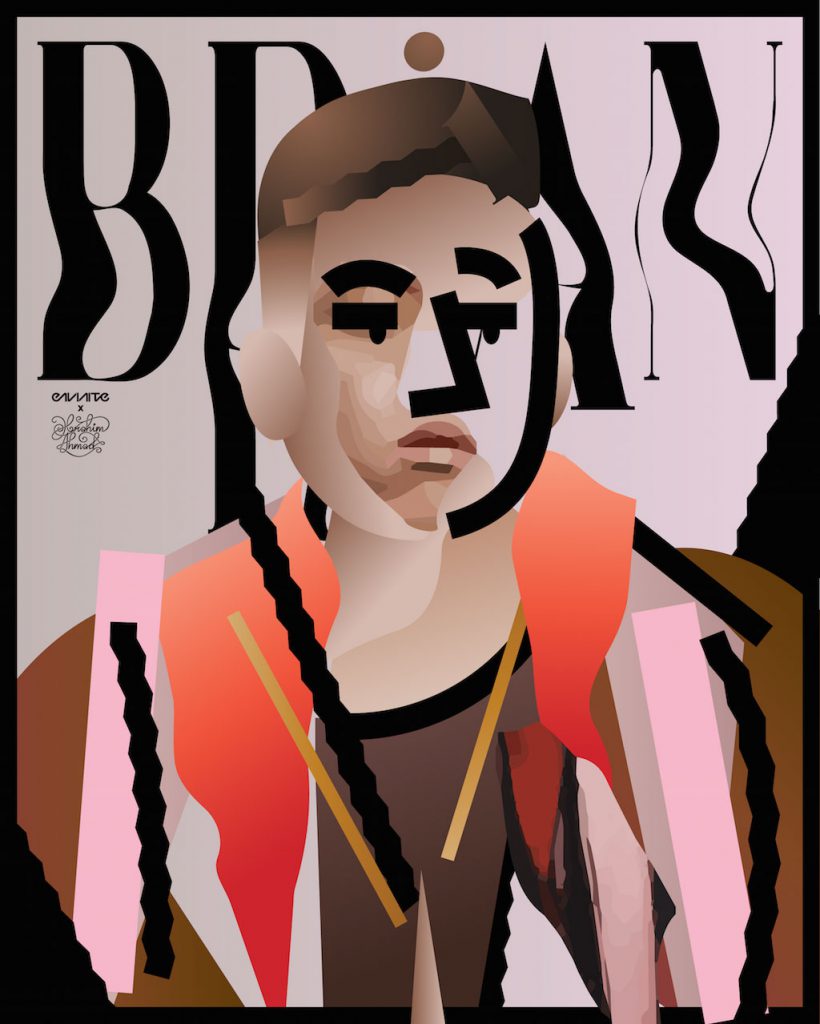 Ibrahim is a packaging designer and illustrator from Indonesia, he graduated from a Graphic Design program in 2017 and made the switch to working freelance full time after just one year working in a small branding agency. He has also produced music under the moniker “Envinite” and now he’s working on bootstrapping his startup. He joined the jovoto community last year and already had success in multiple Open Projects. Let’s dive into our questions and his answers:

jovoto: How did you find out about jovoto and what made you want to join?

Ibrahim: I found out about jovoto about a year ago from a designer community where we discuss and review our experience on different freelancing platforms. jovoto seemed like a bit of an underdog – only a few people had heard of it and tried it, but those who had only had positive things to say. I find jovoto quite unique because its projects are not limited to a creative field (ie: design-only tasks) and because of the focus on the ‘collaborative’ model where multiple people (often with different professional backgrounds) are invited and paid to work on a single project. This allows for a more thoughtful decision-making process that guarantees a more professional end result I think.

My concern with most freelancing platforms is that they either only run ‘contest’ model projects where individuals are competing against each other and only a few of them get paid or the ‘gig/1-on-1’ model where clients just look for the lowest bid and thus indirectly force freelancers to make competing bids. While these two models may provide more opportunities for freelancers compared to the ‘collaborative’ ones like jovoto’s Invite Projects (because contributors are handpicked), I think the shortcomings they have create a “quantity over quality” culture among freelancers that I personally dislike. I feel like jovoto provides an alternative solution that fits with how I work.

That said, I have only taken part in four open-to-all projects on jovoto so far since most projects are invite-only and I have not yet been selected. But out of those four, I received awards in three of them – including this Creative Spotlight feature. I found that my first year freelancing full-time I actually exceeded my revenue target but I am always looking for new projects and I hope that I can find more opportunities participating in jovoto projects in the future. 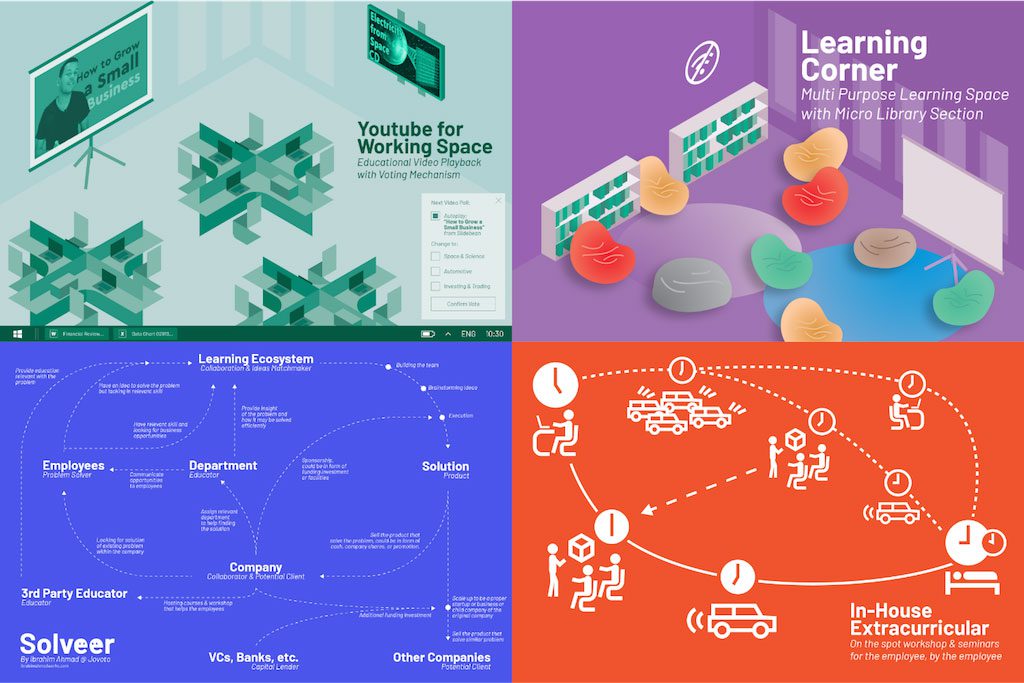 Ibrahim’s submissions in his first jovoto project: Design the Future of Learning

Can you describe a typical workday for you?

Since I became a full-time freelancer in mid-2018, my typical workday has stayed pretty much the same as a regular 9-5 designer with occasional overtime. Although I laze around if I don’t feel inspired to work and the morning is reserved for music producing or exercise. I find that my schedule has gradually shifted to night-owl mode because most of my clients are half a world away and I like to be responsive with clients in different timezones.

However, that has changed since I started working on my startup project earlier this year. Now I have to work at least 12 hours a day often on weekends as well and have dropped music producing at the moment since I’m working two jobs to support myself and to bootstrap my startup. 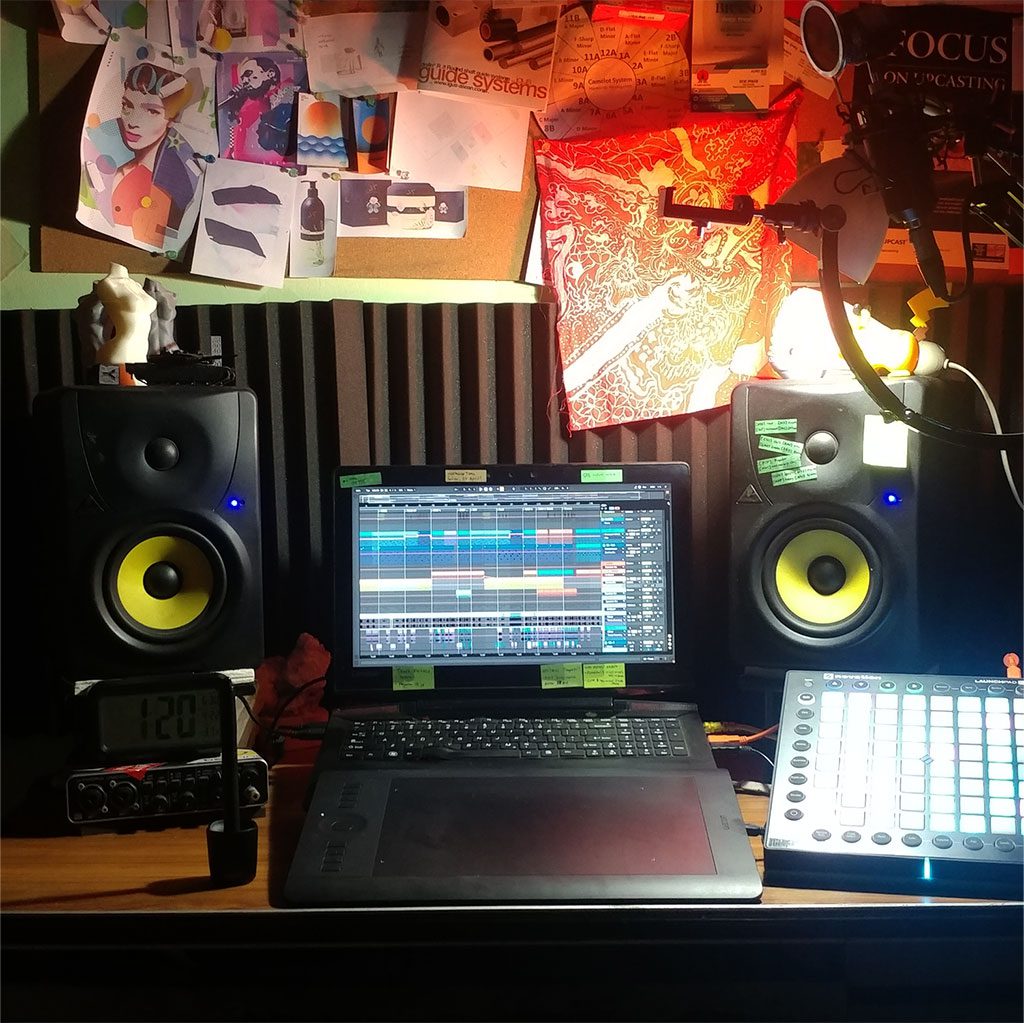 Where Ibrahim gets creative!

Ah yes, as well as working in graphic design you have also released music! Tell us about how you got into that – do you approach making music differently to doing graphic design?

I started learning music producing back in high school after I discovered the EDM scene, specifically trance – classics like Armin, Tiesto, Corsten, and others. I thought it would be cool if I could become a famous DJ back then, but I only thought about music producing seriously when my friends invited me to co-run a small record label called “Big Pumpkins” in college. So far, I have only released five singles and one remix – they are are available on most music service platforms, e.g. Spotify.

My approach to producing music is similar to doing graphic design, I would start ‘sketching’ before adding details. With design, we often start by making a vague sketch then draw outlines a bit until the shape we want is clearly recognizable. With music, we start with making the bare structure of the music – usually, that would be drums arrangement first – and then fill it with details (bass, strings, leads, etc) one after another. However, I find that it took quite a long time to make music compared to doing graphic design because sometimes I become too occupied with tuning fine details of a particular sound way before the bare structure of the music is completed.

It’s quite interesting that there’s a connection between visual and auditory senses – something you learn if you do both design and music producing work. What I mean by this is that when someone knows graphic & sound design, I think they could imagine how an image translates into sound or how a sound will look like if it’s an image.

I like to try and combine music from various genres, which often makes it sound like a trainwreck, but it’s my trainwreck and I love it. For the time being, producing music is simply just a side hobby, maybe later I could make an actual career with it, who knows. 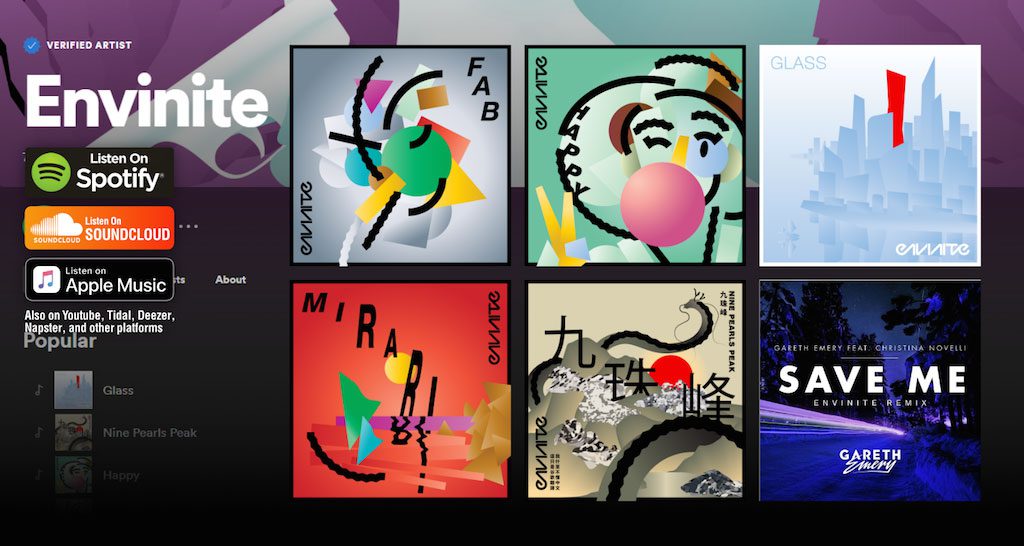 Yes, who knows! As you mentioned before, you have also founded a startup: Filagain – a 3D printer filament recycling service – tell us a bit about that: where did the idea come from, how did you get started and what’s the next big step?

I was originally looking to start a 3D printed wristwatch company. However, during prototyping using my custom-built 3D printer, I found that 3D printing causes a lot of unwanted plastic waste. I am not really environmentally conscious, but I feel like there’s an untapped opportunity in the recycling industry. Late 2019, I ended up putting the watch idea aside – considering the wristwatch market is overcrowded already, especially since smartwatches are currently disrupting it.

In February this year, the idea of doing something with recycling and the 3D printing industry came to me so I tinkered with the idea a bit and Filagain was the result. Filagain (http://filagain.com) is an eCommerce platform that sells 3D printing materials or ‘filaments’ and offers to exchange the customer’s 3D print waste into a cash balance to be used on their next filament purchase. Filagain will then do the recycling. (Note it’s not a ‘filament recycling service’ – where new 3D print filaments are manufactured from processed waste – but a ‘general recycling service’, where we process 3D print waste into raw plastic that is sold to plastic product manufacturers, including 3D print filament manufacturers.)

At the end of July, I launched Filagain BETA to test the idea with my local 3D printer community. There was already some anticipation and I’ve already had people send their 3D print waste and make a purchase. The next big step is to run this idea for some months until I receive adequate samples that show the potential of this idea. I might even search for potential co-founders – until then, I can start pitching for funding and then focus on growing the company. 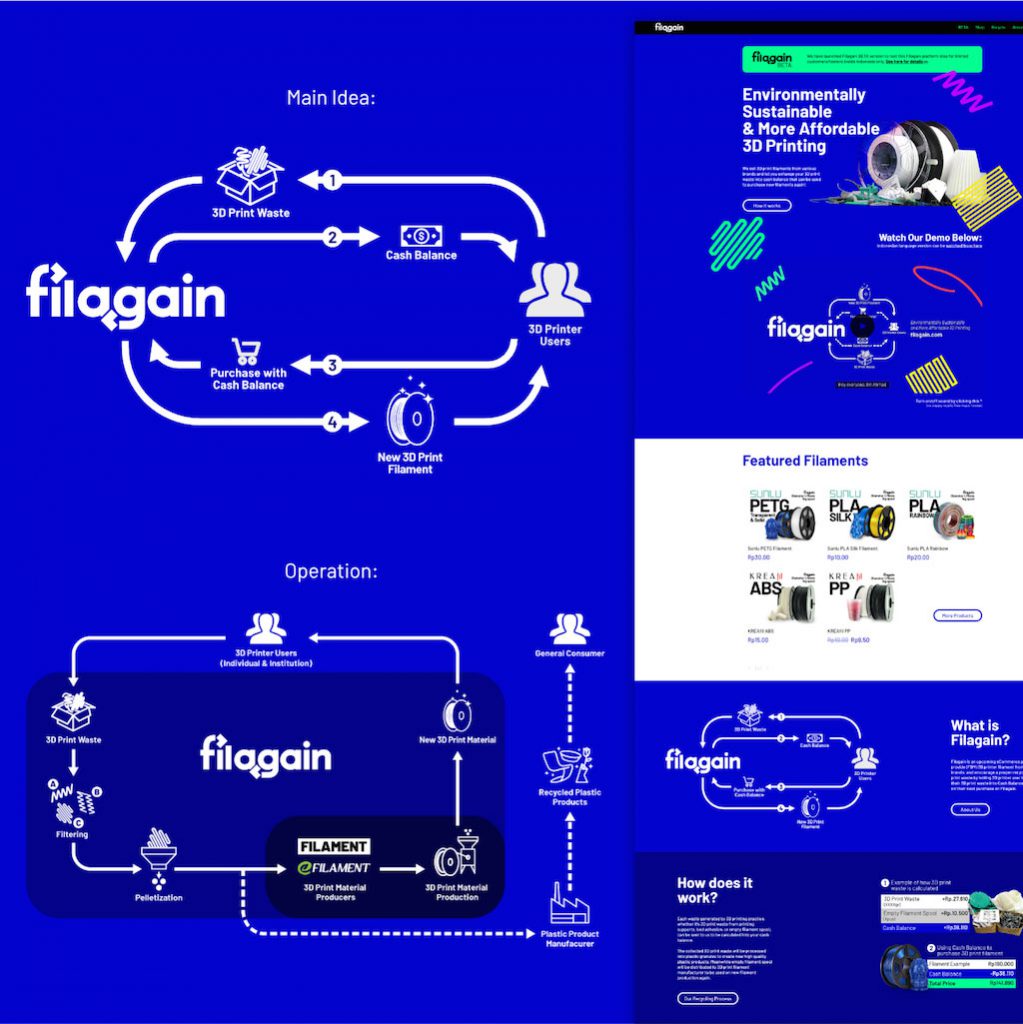 Interesting! Do you believe there is some sort of pattern or formula to becoming a successful entrepreneur?

I firmly believe that the key steps to be successful, not just at entrepreneurship, is to be willing to take risks, put in the hard work, and stay focused. These three points will increasingly become harder day by day especially when competitors start to take notice. I think Alibaba’s founder, Jack Ma, said it best: “Today is hard, tomorrow will be worse, but the day after tomorrow will be sunshine”.

So far, I do not consider myself a successful entrepreneur (or designer/musician) but rather just on the way to making it big. Nobody knows when they will make it until they’ve made it!

You are definitely on the way! We’ve got one last question for you: If you had to go back to school or learn a new skill, what would you want to learn?

I would like to learn something that I see growing demand for but not too much competition by the time I gained enough experience in it. I would imagine it would be something technology-related like artificial intelligence. I would want to pick skills not just because I have a passion for it but rather the opportunity it provides in the long run since school is not free!

However, with learning new skills outside school, I could learn whatever for free but I would prefer to learn business-related skills like management & accounting because they are essential for my entrepreneurial ventures, and currently I’m actually in the process of learning these business skills!

Thank you for answering our questions, Ibrahim! You’ve already packed an impressive amount into your 25 years on earth and we look forward to seeing what the future holds for you, both on jovoto and beyond! 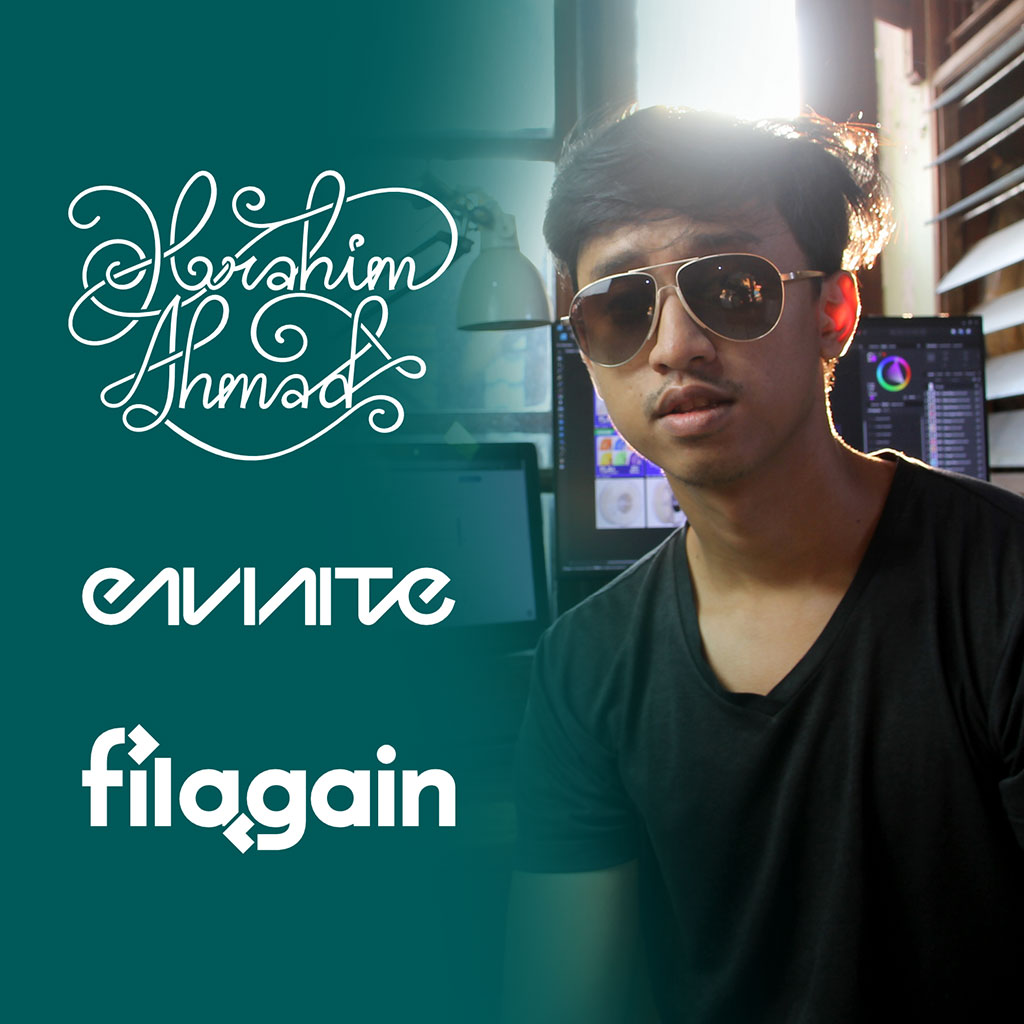 Are you, like Ibrahim, always looking for new projects and more opportunities?

>>> Find out more about how we work and sign up today!