What Designers need to know about AI: A crash course

What does AI mean for designers? In order to really answer that question, it’s important to first understand the general landscape of AI right now. Here’s a crash-course.

This article is the second in a multi-part series on artificial intelligence, part of the ongoing “Artificially Enhanced Banking” Crowdstorm in collaboration with Deutsche bank. The series aims to provide context and inspiration for creatives exploring what AI can do for the banking industry. The first post was an introduction to Ai through movies.

Artificial intelligence is the latest trend everyone’s talking about. Hundreds of articles have been written in a matter of months. People are starting to wrap their heads around the technologies behind AI, the major players involved, and what it all means for the future of industry and even for humanity itself.

Some of the world’s brightest minds are seriously worrying about a future where machine intelligence surpasses human intelligence. What horrors await when robots run amok? Robots executing banking transactions could rebel and crash the economy. Your AI psychologist could damage your psyche due to a pesky firmware glitch. Robots trained to “think” and “feel” in humanlike ways could bend our behavior with virtuosic skills of manipulation. Large, profit-seeking corporations are likely to get their hands on superintelligence, and use it ruthlessly to their benefit. Maybe scariest of all, what about AI developed for warfare—literal killing machines endowed with the ability to make autonomous decisions?

This may seem like the stuff of silly sci-fi. Before you dismiss these hypothetical scenarios, consider the fact that luminaries like Elon Musk and Bill Gates are kept up at night worrying about these problems. It’s a sobering reminder of just how soon these seemingly far-out ideas will become real issues for our society.

OpenAI is a new nonprofit AI research company funded by Elon Musk, Sam Altman, and many other notable people and organizations. According to the company’s website, “Our goal is to advance digital intelligence in the way that is most likely to benefit humanity as a whole, unconstrained by a need to generate financial return.” The project isn’t just about benefiting humanity, but also about avoiding disaster.

Another key element in today’s AI landscape are the investments being made by companies big and small. Startup world is in the midst of a “great bot rush,” with hordes of eager investors vying to own a piece of the next big breakthrough. 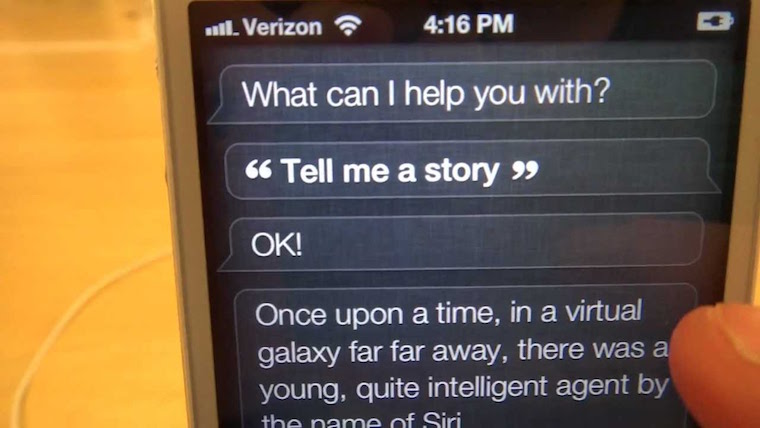 Big companies are placing significant bets on AI as well. Google has Google Brain, a machine learning unit whose deep-learning algorithms plug in to a range of products across the company from maps to ads to autonomous cars. Just last month, Facebook released a new platform that makes it easy for any company to build a chatbot inside their insanely popular Messenger app. Facebook also has M, a personal assistant tool similar to Siri that lives inside the Messenger app. IBM has Watson, a sophisticated question-answering system originally developed to compete against humans on the television quiz show Jeopardy!, but whose abilities have obvious commercial applications for banking, medical, retail and beyond. 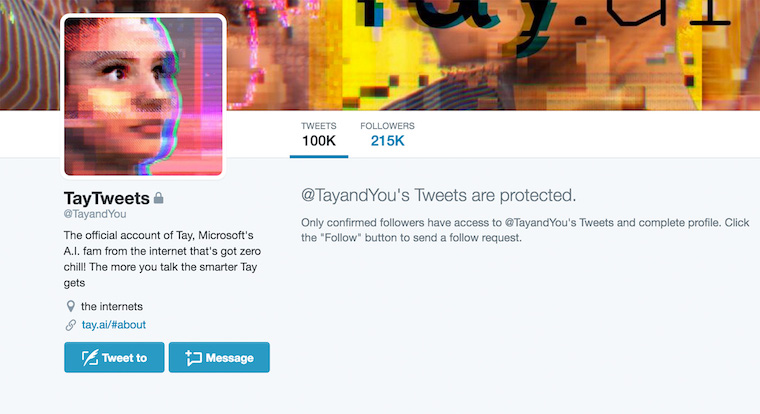 Earlier this year, Microsoft CEO Satya Tadella said that Microsoft is betting on a near future where language-based interfaces are the standard in human-computer interaction. By the way, Microsoft recently had a disastrous AI experiment with Tay, a Twitter bot designed to build its own linguistic repertoire based on information “learned” from what other (human) Twitter users say to it. People on Twitter “educated” Tay with racist, sexist comments, which were sure enough regurgitated by the bot. Within hours, Microsoft took Tay offline because she was being so wildly offensive. Microsoft also has Cortana, a much less scandalous Siri-like assistant who also integrates with Skype.

More honorable mentions in the contemporary AI landscape: Telegram and Kik both have bot platforms, similar to Facebook Messenger. This means we’ll be seeing a lot more chatbot-powered customer service platforms, games, and entertainment in near future. Slack, the insanely popular team communication tool, has its beloved Slackbot, an AI assistant built right into the product from the start. Slack also has a new $80M fund dedicated to investing in startups that will build more bots that can plug into Slack. In another corner of the web, you have x.ai and Clara, two much buzzed-about personal assistant robots using written, natural language via email correspondence just like a human assistant would. The service is so good that some people who have scheduled meetings with x.ai don’t even realize they aren’t actually corresponding with a real human.

So are all these services any good? The truth is, not really. Early adopters and press pundits covering the consumer-facing bot explosion generally report a disappointing experience. 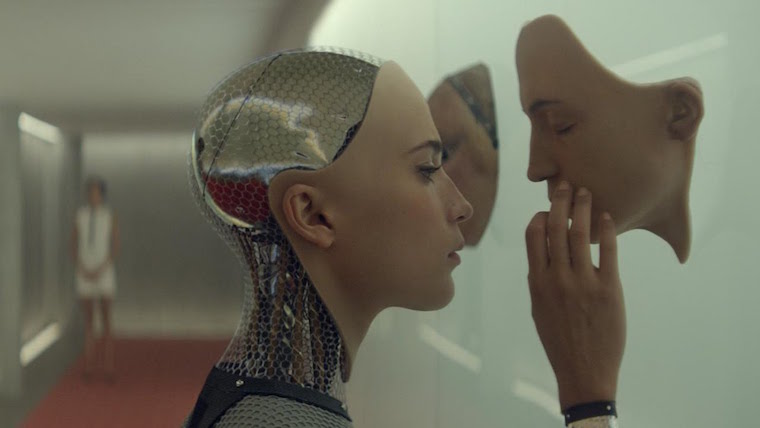 There is a big gap between the sci-fi informed dreams of investors and technologists and the reality of what’s actually possible right now. Luckily, understanding human needs and aligning user expectations with what’s actually deliverable are two core strengths that designers have. This is where design can help AI right now—by filling the treacherous gap between expectations and reality.

Now that we’ve got a snapshot of AI’s emerging popularity, we can start to think about how creative teams might make meaningful contributions to this fast-paced movement. It’s encouraging to know that since the movement has been mostly tech-driven until now, it’s ripe and ready for human-centered design. Here are three ways that designers will benefit the AI movement in the coming months:

1) Informed decisions about when and where to use AI

Like most highly-hyped tech, AI is currently at risk of being over-used, applied to scenarios that it’s just not that well-suited for. Since good design takes user needs as the first frame of reference, good designers aren’t afraid to say “no” to a new technology—no matter how exciting and hype-worthy it is. When it simply doesn’t serve a user’s needs and goals, it doesn’t belong in your plan. Design’s refined sense of discernment about which tools to use and when will help us deliver AI products and services that customers love.

As conversational interfaces are on the rise, being a designer now means being a good writer. It also means an added emphasis on the 4th dimension: time. UX and interaction design continue to edge further and further away from pure graphics and visuals, and toward the complex craft of designing experiences that unfold in time and space.

Visuals are still important, of course, as graphical interfaces certainly aren’t going away (remember item 1 in this list). However graphical solutions will start to shrink in prominence as other types of interfaces (gestural, conversational, invisible) are indeed on the rise.

3) Help us through the trough 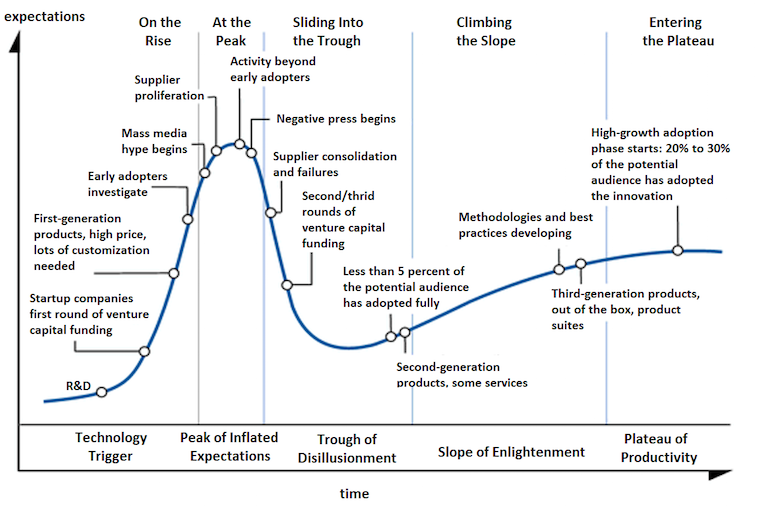 The Gartner Hype Cycle shows us how tech hype works: it starts with a simmer, comes to a rapid boil and cools right down before slowly heating up again. There’s always an explosive peak—that’s where AI is at right now—followed by a disappointing bust, and finally a slow yet enlightened climb into widespread adoption.

As trained experts in understanding human needs, emotion and behavior, designers can help get us through the trough of disappointment, which is coming our way soon.

Here are some open questions to frame the challenges ahead:

How might interface design support reasonable user expectations and help us avoid disappointment with early-stage AI?

How might we use our knowledge of pop culture (films like Ex Machina and Her for example) to bridge the expectation gap for consumers interacting with products that simply aren’t that sophisticated yet?

How might a neuroscientific understanding of how our brains processes images, sounds, and touch help us to know which interfaces are best-suited for which scenarios?
Choosing which tool to use at which moment is a process which can be supported by an understanding of the brain and how it processes information. Conversational interfaces are now just another tool in the designer’s toolbox. As with any tool, it’s important to know when and where to use it. Join us in the next part of this series for an interview with neuroscientist Nina Kraus for a deep dive into this question.

To start using your newfound knowledge, check out the ongoing Artificially Enhanced Banking Crowdstorm to share your vision of how Artificial Intelligence can help Deutsche Bank reinvent its customer service experience. There is a total prize pool of €25,000 and the chance to win a ticket to any TEDx event in the world including accommodation and travels.

Header is image taken from Gigacom.com