Heads up jovotans! It’s time for an update on the LifeEdited success story!

From October 2010 until January 2011 the LifeEdited projcet took place on jovoto. Graham Hill founder of Treehugger & initiator of LifeEdited, challenged the jovoto community with interior design ideas for his 39 sqm space in New York, remember? The apartment should be designed in a way that creates a freer and less complicated way of life, therefore drastically minimizing the environmental impact. This space also had to include a sit-down dinner for 12, space for 2 guests with some visual and ideally auditory privacy & a hideable kitchen.

A few weeks ago, in May 2012 Graham Hill could spend –  his first night sleep in his fully realized apartment space. And it was published in a 3 page spread in the New York Times newspaper! 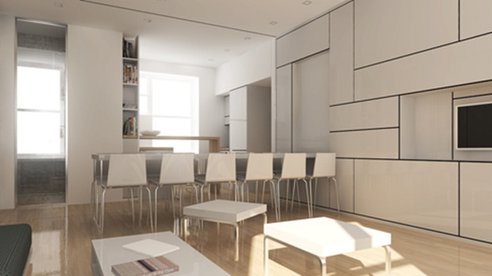 Cooperation from NYC to Bucharest

After the success of the first apartments Graham Hill is partnering with Catalin Sandu for further projects, including the planning of an even smaller apartment in New York and for the Zappo DOWNTOWN PROJECT in Las Vegas, where 400 LifeEdited apartments will be realized.

We talked with Catalin Sandu about the cooperation within the LifeEdited initiative and the most interessting aspects for him: “The most exciting part was definitely seeing the apartment get built and start looking more like the final version renderings. I think usually renderings look better than the final product but once the furniture pieces were assembled and in place, everybody was amazed that the apartment actually looks way better than the renderings. This is also my first built project so this aspect only adds to the excitement!”

Results of the project on jovoto.com

Within this project the jovoto community submitted a total of 298 entries with over 6,000 versions. The discussions under each submission, between the community and experts created more than 11,500 comments.

You can’t get enough? Take a look at the amazing results in this video and how the design accomplishes the brief and how to live with less! And don’t forget to read the articles in the New York Time as well as on Treehugger.