The main goal is to bring affordable housing to homeless and poor people. The most important is to achieve that under the $ 300 budget. No luxury will be made but a proper house to live does not necessary mean space and fancy objects.

The BrighterBox will bring a roof to poor people but more important than that is the process of involving them into building their homes and putting their tastes on it. The idea of colors is essential to bring them a brighter future.
The structure is very simple, wood columns with OSB.
© All rights reserved to: CamaraPedro

I like the idea of bright colors, but paint is so expensive. What keeps the roof from leaking?

Yeah, I know it is quite expensive. but the main idea is that the people should be take action in building their homes, so not necessary the house must be painted at the first stage, It is very important that the person who is going to live there assign his personal taste on the house, so why not paint after some time ?? why not paint after earning some money ?? it is all the process of growing.

The green roof is very simple, we have the OSB + Impermeable Blanket + Small Rocks, we built a mini house in my university with the same structure on the green roof, it is quite cheap and can be made by anyone. I will draw a detail and upload this week.

Hey, I realy like your design. Did you tought about cost?

Hey! Yes, in Brazil 4 wood columns and OSB are quite cheap, but it all depends in which country you are living, I would say that if it is mass produced by a company the $ 300 budget can be achieved.

The idea of usable roof space is the most original portion of the concept.

Yes, it will be dirty after some time but so the brick and other materials too. In my opinion that is not a major problem.

What kind of impermeable blanket do you propose?

It is called in Brazil Pidim Blanket, but it does not go alone, it is at least four elements to make it works, I will upload an image this week to explain it better.

bellaire
over 8 years ago

noble efforts...but seriously, which one of these concepts are even close to $300. Isn't that a concrete slab? you're telling me that you can reinforce and pour a CONCRETE slab for less than $300? Not to mention the rest of the structure. I'd love to submit ideas but I honestly think this whole notion is futile. To make an accurate effort we have to know the contexts for each structure designed and the cost per sq. ft. for local materials.
Why a green roof? All the waterproofing costs could definitely be used in more sensible applications, wouldn't you agree? like insulation?? Please show me a design that comes close to this goal....the closest one I see is the 10x10 canvas tent.

CamaraPedroowner
bellaire
over 8 years ago

Like I sad before, it all depends in wich country you buy/produce, it is not expensive in Brazil, if you take a look on the slumns in Rio or São Paulo for exemple, you will notice they have better house than the ones on the contest, the concrete slab it it just a concept, I need something to isolate the wood from the ground, if concrete is too expensive in certain location, ok maybe we findo some local stone...do not take everything so serius, the main ideia is to look for solutions, maybe after making some mistakes we create something good, but again it all depends on the location...

Zerooks
bellaire
over 8 years ago

Another thing that wasn't considered is "$300 where?"

300 dollars in the US is not the same as $300 in Uganda. A yard of concrete may be $100 in the US but $10 (or less) in Central Africa. There are just so many variables that come in to play (time, demand, labor cost, transportation, cost of living, weather, and of course many more).

If we're speaking in dollars spent in an American store a 50 year building that withstands the elements can't be constructed for that price. If we're talking about 25% of that $300 being dollars spent in the US and the other 75% of the $300 spent in Africa that's getting a little closer to reality.

Define what $300 is. The value of $300 changes every day, everywhere in the world. That's why some people shop at the Wal-Mart one city over from where they live. The bread is cheaper than in the town they live.

I keep hearing "it can't be done, it can't be done for that much!" I don't think that is true. It really comes down to where the money is being spent.

Zerooks
bellaire
over 8 years ago

Sorry, that was just sort of a reiteration of Camara's comment. To put it plainly: I agree with Camara.

nsonne
bellaire
over 8 years ago

You're right Zerooks, thanks for your comment. All we need is some hint, let's say a details cost estimate of CamaraPedro's submission if built in Brazil. Sure the prices aren't the same but we need a clue in which area it can be built at least. @CamaraPedro: great job, hoping to see a cost estimate soon!

i like the aspect of a "happy looking " house, but to be honest, i think it is very limiting to have such a boldly coloured house for 50 years, imagine ... and all houses around it so colourfull ...
A house is not a skirt. you cant wear a different house every day. How would you feel if you had to wear the excact same colours every day for 50 years? :)

but, where does it say that you have to keep the color for 50 years ? The owner will paint as he likes, and they will sure change it many times in the future, it is very complicate to make an universal design ( considering social housing ), each people have their culture, what I am proposing is that the design should fit the owner... if you take a look at some slumns in Rio, there are some nice coloring projects, it brings life to them, and that is very important, considering their poor condition.

Like I sad before, it all depends in wich country you buy/produce, it is not expensive in Brazil, if you take a look on the slumns in Rio or São Paulo for exemple, you will notice they have better house than the ones on the contest, the concrete slab it it just a concept, I need something to isolate the wood from the ground, if concrete is too expensive in certain location, ok maybe we findo some local stone...do not take everything so serius, the main ideia is to look for solutions, maybe after making some mistakes we create something good, but again it all depends on the location...

I like the attitude - a low cost house need not to look ugly. What color, what roof - all details, no need to make noise about it. The basic of the concept is construction, layout and technology. This concept is very realistic one among others. I see no problems here to reach costs close to $300.

That is the point! What to make ugly if we can make it a better design!

PanTau
over 8 years ago

I see problems in the rainy season.

CamaraPedroowner
PanTau
over 8 years ago

PanTau
PanTau
over 8 years ago

I worked in crane constructions and we used waterproofed press wood? for the floors of cabins. After some years it started to loose on the corners and to make bubbles. It was not permanent wet only from wet shoes on the floor and wet wind. And here we speak from country's with rainy seasons. And the material was not cheap.

nice colors. but paint would be an extra for the budget. What about using materials with different natural colors?

that would be an option, but I do not think it would give the same impact, lets go back a little bit on history, in the past they used to paint with natural resources, Maias, Astecas, Incas...even in Brazil...and they did not have any technology, if it is expensive somewhere, maybe we can find a natural resource do replace the expensive paint....It is just a thought, but I like your suggestion!

CamaraPedro, it's a colorful design for sure, I just don't think it takes us anywhere we haven't been before, and I wouldn't want to live in a little box like that just because it was all I could afford.

I echo many of the comments above, such as the fading colors over time, and once again, it's a square structure, which is what our western civilization seems to think is the only thing we can build...when we have literally thousands of years of evidence all over the earth of how round, aesthetically pleasing structures, built in natural stones, reeds, clays etc., not energy-intensive and manufacture-polluting materials such as wood, cement, metal, can endure for centuries!

I also disagree with Zerook's "If we're speaking in dollars spent in an American store a 50 year building that withstands the elements can't be constructed for that price. "

He's right in one way: things you buy in a store will quickly eat up your $300. But I know you can build a small dwelling right here in America for $300 that will last, not 50 years, but 500. It's based on a technology called earthbag building. It uses woven poly bags (the only thing I don't like about it, because they're plastic, same stuff as rice bags -- and therefore very cheap), and the soil right from the property you're building on. With the proper soil mixture and just a few pairs of unskilled helping hands to help you, $300 is not a long shot at all, but eminently feasible.

My wife and I, tired of paying all our lives on mortgages for houses that won't live a whole lot longer than we will, are moving forward on an earthbag building project, as others have proposed here on this site, that by our own cost projections will cost between 10% and 20% of what the same size structure sold by the building industry would cost. In dollars and cents, $45,000 instead of $300,000 for a 2,000 foot complex of interlinking dome-like structures.

And it will not be eaten by termites, will breathe like any earthen structure, will not be blown down because it is based on a sphere, thus much stronger than a box, will not rot or mildew, will not burn down, and to us, much more natural and beautiful than any square-based structure.

Check out Owen Geiger's little double-dome using geopolymer as proposed in this contest. Geopolymer is poured limestone rock, basically, which some researchers now think is how the pyramids were built...and they've been around for awhile.

Then check out earthbag building...it's going to change the world because it's cheap, and it works. And it's beautiful. We just have to get our heads a-"round" it. And in fact, if you must, you can build rectilinearly with earthbags too.

www.calearth.org
patented, earthquake-resistant technology free to the masses www.earthbagbuilding.com
Owen Geiger's site. He's a real pioneer in getting this technology into the mainstream consciousness

book: Earthbag building by Doni Kiffmeyer and Kaki Hunter, one of the "bibles" for this kind of construction.

The green-wash on roof might as well be pink...

billie
over 8 years ago

Nice idea to add color. Glad to see a solid foudation. Not being extravagent is what counts for the budget. A fifty year life & low annual maintenance are more important than $300.00 vs $500.00.

I know some of the comments indicate $301.00 should disqualify an entry but have you ever seen anything delivered on time on budget without deficiencies? 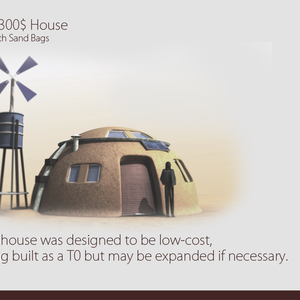 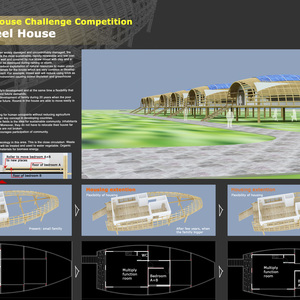 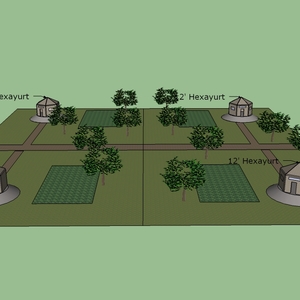 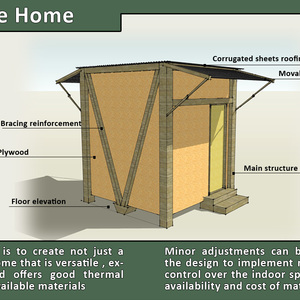