Read the BriefSee all IdeasCreatives
'The $300 House' Challenge
Viewing published ideas, sorted by popularity.
previousoverviewnext
Recycled plastic block house
All varieties of plastic trash compacted with a manual compactor into blocks. These blocks are then used to build a structurally superior house. Our first model built for Southern Methodist University cost $250.00 to build.

The system was built with two goals in mind.  The first of course was to provide permanent housing for the poorest of the poor using materials readily available just about any where in the world.

The house we built for SMU cost us approximately $250.00.  Half of that was for the wire, there is about twenty feet of wire total in a block including the wire holding the blocks to each other.  The other half of that was for the rebar we purchased and used for the project.
Everything else was free, (found).  The mud was local and the sand and horse manure used with the clay to make the plaster was donated.  The framing for the roof was large pieces of lumber that had been put away for hauling off.  I cut it up to make the framing.  The same thing was true for the pieces of roofing.   It was in a pile on a friend's farm destined for the scrap yard to be sold as scrap tin.
I don't feel it would be fair to price in the steel foundation I used for the building.  That's because it wouldn't be part of a house built in the real world for a real family.  This was a model house and I had to either build it to dismantle and remove or make it movable on a trailer.  I chose to make it capable of being loaded up onto a trailer so I could haul it for the next step in its journey.  That happens to be two hundred and fifty miles from where it was on display.  It will tested and destroyed at that location.  The steel frame that allowed us to  haul it will also be used to secure the building to the floor for testing.
In the real world scenario we would hope for a concrete footer or foundation.  If that isn't possible then the house can still be built and we believe be a good structurally sound home.
The foundation trench would be dug.  Rubble could be used to fill that trench to grate.  Before the rubble is placed in the trench rebar pieces would be driven into the ground at angles.  More rebar would then be tied to those pieces driven into the ground to form a grid to lie in the trench and be covered with the rubble.
We can't over emphasize the importance of a good foundation, concrete or rubble.  That's because what makes this house so substantial structurally is the wire that goes from one side of the foundation over the top plate of the wall and down the other side to the foundation.  This wire is always post tensioned after the wall is built.
The rebar doesn't have to be new to be used.  It doesn't even have to be long pieces to be used.  So in places like Haiti where the used rebar should be able to be purchased for scrap or just above scrap price the cost of the house should reflect this.
Anecdotal evidence has shown us the combination of rebar and wire connecting the blocks together gives us a structure that handles vibration very well.  The best way I can describe the reason for this is to compare the way a chainlink fence handles a seismic event versus the way a concrete structure does.
Our structure requires less rebar than a comparable one built with concrete, earthbags, or compressed earth blocks.  That's because the bulk of the connection is mechanical instead of friction or adhesive.
Plus there is this thing called mass.  When we built the Ubuntu-Blox house for SMU we decided to make a statement.  We could have used all kinds of plastic.  However, we have curbside recycling in north Texas.  They take all plastics but foam and film.  So we decided to only use foam and film plastics in our blocks.  Our blocks weighed between 1.2 to 1.5 pounds each.  The variance came from using a lot of loose film plastics int a block.  Film plastic weighs more than foam plastics does.
Our walls were nine courses, about ninety inches high.  Do your math, nine times 1.3 then times .70.  Nine courses with each block being 17.5 inches long for the .70.  That's 8.19 pounds per running foot of wall.  The other options like earth bags, compressed earth blocks, or concrete blocks would run what, fifty times that at least?
We don't need as much rebar to maintain stability, thank you very much.
Don't let the thought of low mass allow you to think the wall isn't strong.  One of the challenges we gave visitors was to push on the walls.  Even before we put on the plaster the walls were very rigid.  Keep in mind, the post tensioning is important.  It changes a wall of pillows into a wall of compressed plastic which creates structural stability.
There is the cost of the wire.  It can be substantial.  I bought twelve gauge galvanized fence wire in hundred pound coils.  They were about $75.00 each for a little over three thousand feet.  That comes out to $.025 per foot and figure an average of twenty feet of wire per block.
We've since came to the conclusion that fourteen gauge wire will work just as well.  If the wire is bought be the ton then the price per foot drops into fractions of a cent per foot.
Let's say a charity wanted to stretch their dollars.  They provide the wire.  That means the cost of the blocks is the cost of the plastic, free or scrap plastic price.  Foam and film plastics have so little value that they are not recycled curbside here in the states.  The going rate I heard in Haiti  for bottles is .05 per pound.  A block consisting of foam, film, and bottles would be less than twenty cents per pound plastic value.  Our 8.5 foot by 12.5 foot house had approximately two hundred and seventy blocks.
Here's a video that shows how it is done.  http://youtu.be/qxQ-aJWzwsU
© All rights reserved to: harveylacey 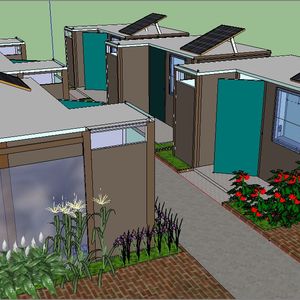 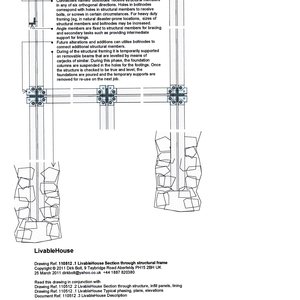 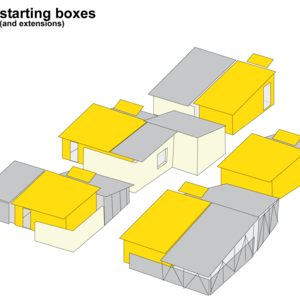 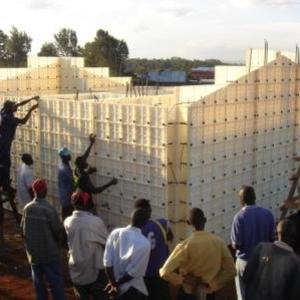