A $300 house requires it to be made small(8 ft wide by 8 ft deep by 7 feet high( dimensions) and cheaply.  The building of the house should require no significant tools, forms or additional equipment.  The house should provide shelter, fresh air and a sense of respect for the home owner.  My design meets these requirements.  I have a CAD Models, cost estimates(under $300), video and photos of a prototype wall construction of the house on this website.  I made the prototype over the weekend and it was very easy to make.  I used a $2.50 plastic tarp that I purchased at the hardware store.  $6.00 worth of concrete, I bought the 2 bags of premix concrete each bag was 60 pounds and a 20 ft piece of 3/8 rebar for $4.40.   I also bought high strength thread to sew the tarp.  The sewing of the tarp took about 15 minutes.  The duct tape was used to wrap around the end of the rebar to prevent damaging the tarp when I inserted the rebar.  It took me about twenty minutes to cut and build the header of the wall.  I then spent about twenty minutes mixing the concrete by hand and pouring it into the tarp wall.  For under $20 in the US and an hour worth of work I was able to create this prototype wall.  As I worked on this prototype, I knew I needed to develop a technique to remove the wood forms from the header design in order to build huge volumes of house quickly.  I am proposing this can be achieved by using the rebar in the header to form a rebar beam that.  I think this is the key in developing a low cost house, because you could build 1,000�s or 100,000�s of houses simultaneously.  The cost estimates and hand drawings were done with the design using the wood header frame and the CAD models were done with the 2nd generation design.  Sorry for the confusion.

Before I get too far into the description of the design, I think this proposed design is an excellent design or at least a design that should be given to Engineering Universities in India or other countries to give to their engineering students to continue to work on the concept.  I think improving and optimizing my proposed design would be interesting design project for engineering students.  If you have connections to these universities please forward my design information.

I believe I can produce this house for under $300.   I would have to spend some time doing an in depth structural analysis to verify optimal dimensions to get exact dimensions numbers, but I think my cost estimates are close.  Rebar is sold by the pound ($740 per ton) or kilogram so I was able to get reasonable costs estimates for the rebar.  I used the actual cost I paid for the tarp material to figure the cost per square foot.  Concrete is made from cement, sand and gravel.  I found the cost of cement in India and estimated the cost of sand and gravel to be approximately $10 per yard.  I have estimated the cost of concrete per yard is $28 per yard.

My vision in creating this $300 house design was to build 1,000�s of houses simultaneously without costly concrete forms.  The proposed design starts with building four corner posts approximately 6 ft high.  This is done by supporting a tarp post bag using the internal rebar structure and pouring only a foot of concrete at a time and allowing it to harden before another foot is poured.  The tarp bag is not lifting the concrete it is only holding from flowing outward.  I estimate the tarp I used could hold 1 vertical foot of concrete without damage in the corner post tarp.  This might seem like a slow process, it would take six days to pour the post but I this processes does not  require forms.  Now imagine creating a small village and in approximately six days I would have all the corner posts created for every house in that village.  Think of this design concept of building houses in parallel and if you designed using forms you build in series.  The more houses you build simultaneously the more you want to build in parallel.

Update...  The 2nd generation header design will increase the estimated cost to $332 due to the more rebar.  However if I use a cheaper door, eliminate foundation and either leave the tarp or mud the wall joints I estimate the cost to be $296.

I performed a simple test using to simulate how the post will fill with concrete using water (See video below).   Polyethylene bag or sheet like material could also be used with heat welded seams if ithe material can be designed to withstand the applied forces and induced stress.

© All rights reserved to: kalnovak 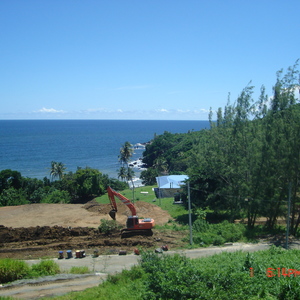 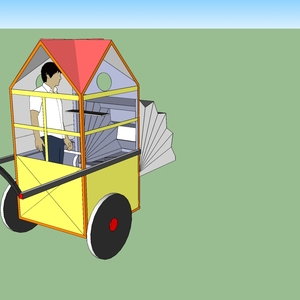 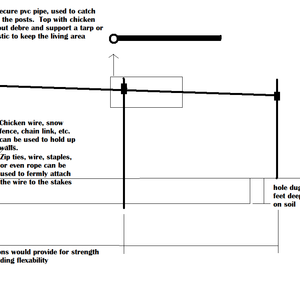 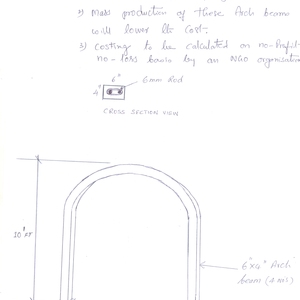