Read the BriefSee all IdeasParticipants
Read the BriefSee all IdeasParticipants
'The $300 House' Challenge
Viewing published ideas, sorted by popularity.
previousoverviewnext
Informally Sustained
Informal homes, when regularly maintained, can withstand time and disaster extraordinarily well. With minor alterations to locally adopted construction methods, I approach the urban scale that rethinks the larger role and function of the squatment.

Illustrated is a collective housing typology wherein each additional house physically strengthens the ever-expanding structure as well as the communal spirit; its growth is akin to the redundancy exhibited in the fabric of grass roots. The study focuses more on the strategic concepts that guide and order the otherwise ad hoc tactics that the builder-resident community sees fit to satisfy their unique environmental, social, and economic demands.

Unlike apartments, which only enjoy the structural integrity between residents, there is a spatial autonomy that retains a sense of private ownership and pride, qualitatively raising the worth and thus the level of care attributed to the structures, without compromising density and variety of public spaces and uses.

The raising of the buildings allow a visually open space in pedestrian-oriented regions. In addition, the raise provides an alternative use below for setting up shop; self-employment proactively leads to stronger viability for better microeconomics.

Presented here is a compact series of studies for an example of such an approach in a disaster-prone, hot-humid climate: Navotas City, Philippines.

© All rights reserved to: bladesxf

billie
over 9 years ago

A lot of the designs use this lightweight easily adapted, moved, modified principle. Quick, light, cheap.

bladesxfowner
billie
over 9 years ago

What that means is that if someone's design has a well thought-out flooring system, they can prop it up and tie onto my grass roots system. What would follow is to connect what will have to (or best) be sheet metal roofing to integrate, with many "shear nails" as it were, to his/her neighbors' roof. What's proposed is a dual lateral-resistant system, where below shallow ground is an eccentrically-loaded bidirectional space-frame and on top is a unidirectional system that gains strength from irregularities in the organic formation of each house connecting to each other in various directions.

The connected roofs would use cleaved bamboo or other light long material for a roof gutter system to direct runoff into a distributed system of rain harvesters (simply over-sized large plastic open-top cans that have already been invented and marketed for this very purpose).

The consideration for social interactions is especially exciting. As a formal reference, have you ever seen the stilt houses off of key biscayne miami, Stiltsville?

I have not seen this particular project, but I've come across similar offshore beach houses. On the other hand, the story behind Stiltsville's creation seems more fascinating than the design itself.

Have you considered real world construction?

What kind of material are you looking at for roofing for instance.

Another thing that jumps out at me is the issue of longevity when it comes to the framing. Since it is designed for a wet location then there has to be trees that have wood that will survive many years as framing, teak for instance. But are those trees already threatened environmentally?

In my reply to billie I went in a bit further as to its feasibility. The roof would be using discarded (or new) corrugated sheet metal as I observed was the main roofing material. The issue of rust I will readily admit has not been addressed, especially if the homes are near saltwater bodies.

A large number of folks that I saw while around Metro Manila (namely along the harbor and river delta) used reclaimed wood from nearby landfills or the like. I conceived that any new materials with regards to framing would be structural bamboo such as Gadua angustifolia (native to S. America), Phyllostachys pubescens (giant "Moso bamboo") and certain Bambusa species(1):

There are a number of studies that I found available online regarding angustifolia and its structural properties. A better one I once found (all my browser bookmarks were erased) was conducted by I believe a German team. It structurally rivals typical A36 steel in tension, 1/3 or so capacity in compression, and I disregarded torsional stress because I conceived the buildings to be built as space frames.

The main form of treatment for such bamboo structures would be to cap the ends with some mortar (e.g. rice gluten (2)) or other anti-pest/moisture barrier. Alternative methods I've found have included "steel-reinforced" bamboo construction. This is done by drilling into end nodes of bamboo and filling it with concrete or cement mix with steel rods threaded through 1-3 bamboos lined adjacent to each other (3). The latter requires relatively far more labor and cost but may likely last longer and be more reliable in such humid climates.

Teak is listed in the FSC (Forest Stewardship Council) but I would prefer using bamboo as it is intrinsically more sustainable, requires less skilled labor (very important for both likelihood of use and feasibility option), and minimal to no milling. Furthermore, acceptable local species are available in both the Asian-Austronesian and American tropics so no expensive import is required.

The "grass roots" analogy construction was designed to minimize the depth that one has to dig for foundations. Namely in places like Navotas where the land they settle on is reclaimed land, a number of key issues had to be addressed: soil settlement, mud slides, high water table, and general erosion. By using shallow space frames, a level of 2-axis stability is created and allows for future expansion with their neighbors as rods or moisture-treated twine (perhaps even nylon string) allows for flexible placement of connection. It's also safer to dig when connecting to existing foundations because of its inherent space frame properties, thus eliminating the need for underpinning, which would be far too expensive and require skilled knowledge.

The 2nd space frame box would be what becomes the visible ground floor. Some planning is required so that a properly-sized door and/or windows can be constructed without obstruction from the diagonal bracing. In some cases, I have arrangements that use elevated planks, to keep away from contaminated/polluted soil/water if necessary, with low stairs that enter each home. This is a built case study that that I've simply adopted. In other cases I intended the household to enter their elevated home via a ladder. Evidently it would not be as attractive and accessible despite being cheaper and easier to do.

As hinted a few times, I took a number of my proposed ideas from existing squatter construction techniques and triple bottom line (environmental/social/economic) adaptation. This gives the residents in question a sense of little or no compromise to ownership and authority when building their community. My "short-term" aspiration is that new and existing squatments can evolve and thrive to the point that it becomes a permanent and safe home for its residents and an asset to the municipality. The long-term aspiration is that developed countries would start adopting similar means of renewed social interactions in a different, lower-tech, sustainable built environment.

A definite downside to my proposal is the issue of individual expansion. That is, with near certainty, an impossibility. Another may be aesthetics. I am personally fond of forest-like stick construction, but that is far from a universal appeal.

Your sketches are great!

Alfonso Legido Mariño
over 9 years ago

Nice models and sketches but I miss more details of your proposal it´s a pitty that you didn´t submited some more vissuals. Good luck !

Yes, there was definitely a lacking of essentials. Thank you for your input and encouragement.

nice drawings - you are clearly trained as an architect! but the models fail to leave the classroom thought process.

Thank you. The classroom model was actually meant to be just that--a generic form that would be designed by and for the residents. Some of the other entries in the competition that provided examples of regional materials in various parts of the world could be incorporated and complemented in this raised housing scheme. It can be criticized as a sort of cop-out, which I agree to some extent, but I feel it more flexible for allowing a bottom-up directive during the construction phase with regards to what belongs in the middle of the roof-spaceframe sandwich. 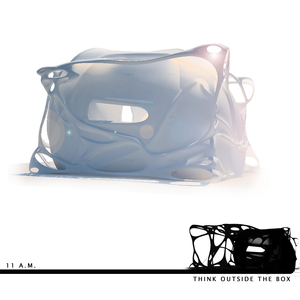 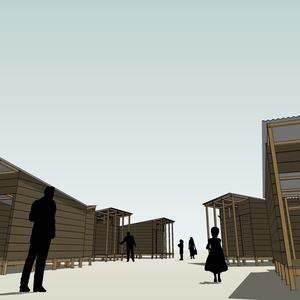 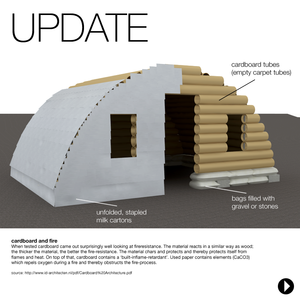 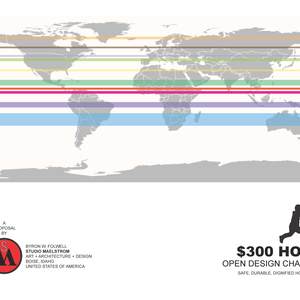