Read the BriefSee all IdeasCreatives
'The $300 House' Challenge
Viewing published ideas, sorted by popularity.
previousoverviewnext
Inside the house, out of poverty
We propose a model of house whose main goal is to serve as a powerful instrument of combating poverty. Building upon a review of several cases of housing policies in developing countries, we propose a housing project for a room that would cost less than 3

In the House, Out of Poverty

poverty. Building upon a review of several cases of housing policies in developing countries, we propose a housing project for a room that would cost less than 300 dolars and would be enough to give health and dignity to families. Our main materials are plastic bottles as wall isolants, cardboard tubes for reinforced structure, tetrapack boxes for the roof and used tires in the floor, all of them combined with minimal use of cement. Natural sunlight comes from simple lamps made of PET bottles with a capacity of about 40W of light. The project is very realistic and budgeted under real prices, allowing for increased child health and cognitive development, denition of property rights and female empowerment, braking part of negative poverty trap caused by poor housing conditions.

Despite being one the main basic requirements for daily living, about 1 billion dwellers worldwide have their health, self esteem, development, and lives threatened by inadequate housing. The shocking images of Port au Prince still completely devastated more than one year after the Earthquake of January 2010 show how poor housing can reinforce poverty. It is estimated that the earthquake about 100,000 lives and left about 1.5million people homeless. The images are even more striking when compared to the much smaller destruction caused by the stronger earthquake that hit Chile within a one-month lag. What would be the consequences of the earthquake in Haiti if it had the same preparedness and shared similar construction techniques from Chile?

The housing poverty trap occurs not only as a consequence of natural disasters. All around the developing world, fast urbanization has been associated the spread of slums. While the move to cities might provide better access to job opportunities, social mobility and educational perspectives for children, it might also pose serious threats, especially for the poor. There is no doubt that with the recent growth of developed countries, the percentage of the world population living in urban areas will tend to increase. How the cities will be able to absorb this incoming population without observing an explosion of informal settlings and slums with very poor quality of life is still an open question and a huge challenge to be faced in the next years. Overcrowding, lack of property rights, poor sanitation, low ventilation, hard mobility and low supply of public goods are all common characteristics shared by slums across the developing world. In some places like Brazil and most Latin American countries, low access to public justice and violence end up being added to this list. We might think that all those problems are only a consequence of poverty. Once the country develops and families get richer, the problem of poor housing might disappear, we might na�vely tend to think. However some recent studies are showing that poor housing is not only a consequence of poverty but also one of its CAUSES.

We propose a model of house whose the main goal is to serve as a powerful instrument of combating poverty. Building upon a review of several frustrated and some successful housing policies in developing countries, particularly with the Brazilian and Latin American experience, we propose a housing project with the following characteristics:

A a ranking basic housing unit that can be built for less than $300. Our basic unit is mostly built upon recycled material, as:

The housing unit can be expanded to include more rooms as time goes by. The house doesn't require sophisticated techniques and can be easily assimilated by everyone. This will allow the dweller to maintain, expand and improve his house according to his needs. This is one essential characteristics of the product. Although standardizing the housing units could potentially decrease costs, we focused since the beginning of the project on a house that would allow for modications made by the owner. One of the common

The house is OWENED by dwellers. Whenever there is a couple, the house title is given to the woman. The purples here is twofold: the first one is to give property rights to the dweller, allowing him to use his house as collateral for microcredit loans. As Hernando de Soto shows, informal houses are mostly made with years of savings from the poor, but the lack of property rights transforms those savings into dead capital, that cannot be used for the accumulation of future capital. Furthermore, by giving the title to the woman, we expect to increase the bargaining power of woman, which is demonstrated to increase the intra-household allocation of resources towards the children. By increasing the resources allocated to children, we will have healthier and more educated generations, substantially decreasing future poverty rates.

The House floor is made of tires and cement. We were especially concerned about the

oor. Its through the floor that many parasites develop, especially in poor houses with a child. It's very common for young children to urinate or defecate in the floor. Floors made of sand or covered by wood mats are harder to clean and are the perfect place for the development of worms and parasites. Parasites eat the nutrients necessary for the

floors had a higher impact on increasing language test scores of children than conditional cash transfers. There was a sizeable effect on child health that coudnt be achieved only thought deworming with Albendazole, and also a signicant effect on perceived mothers self steem and happiness.

The walls are made plastic bottles and revested by cement. We opted to use cement instead of mud and other cheaper materials, again for health purposes. Houses made of mud are well-known in Latin America by being subject to transmission of diseases by insects, as American Tripanossomiasis. By the other hand, cement is very rigid and gives him a good visual aspect to the house. It is very important as the purples the house would look exactly like a common house which would generate no stigma on dwellers. They should be taken into account owns the stigma could incredibly lower the demand for this type of houses. The technique of using cement and plastic bottles to build walls is not a novelty. Some houses were constructed under this technique in the Northeast part of Brazil by inventor called Antonio Duarte, in collaboration with the Federal University of Rio Grande do Norte. The walls were tested against heat and resistance. Surprisingly, the resistance is very high, of 1.94 MPa.

We expect to see impacts on:

- Lower transmission of diseases by parasites

- Lower transmission of diseases by insects and bugs

- Higher self esteem of dwellers

- Increase in self reported happiness

© All rights reserved to: leoandvitor_br 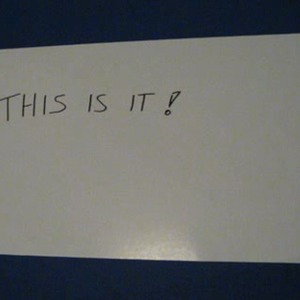 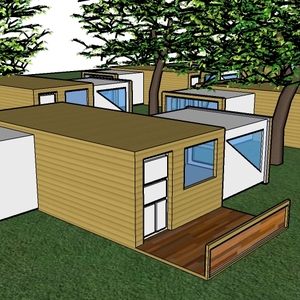 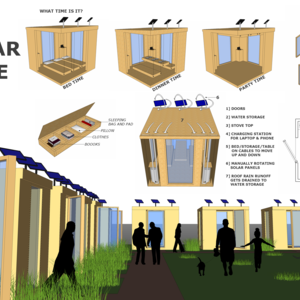 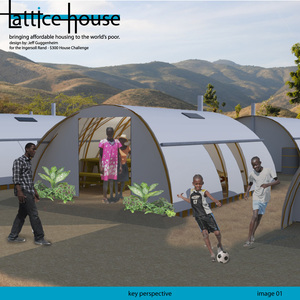