Read the BriefSee all IdeasParticipants
'The $300 House' Challenge
Viewing published ideas, sorted by popularity.
previousoverviewnext
PLATANHOUSE
A house is not necessarily a home, does not always come to represent a special place for the user, not always provide a safe place to live. In marginal neighborhoods and communities, theyre hundreds and thousands of houses, houses in deplorable condition

The banana is a mass consumed musacea in the tropics, which abound in poor communities, including our country. That's why we take it as an essential element of construction, to the point of calling the house PLATANhOuse. In the process of consumption of banana, we waste a lot of things, which can be used to solve problems such as fuel for cooking or in this case, the construction of a home. PLATANHOUSE design was developed with a basic outline for it to be easily developed by users themselves, who would be in the process, connected to their future home, and raise their self esteem and confidence.

PLATANHOUSE consists of several elements: stone foundation, bearing walls and columns made of coconut wood framing, wrapped in chicken wire, and filled with adobe and cement mixture of clay and straw. Windows and doors developed with coconut wood racks and hinges simple and intertwined with palm leaf panels. The floor, which is composed of compacted soil cement, and the roof is a timber structure with a rope tied of coconut palm fiber (with a scheme similar to the rafts) and on them, panels of dry banana (must be dried for 5 days in the sun), they pressed between the joists, and this applies a canvas that leaves an air gap of 5 cm, which is stretched and nailed to the edges of the roof structure. In spatial terms, the design is presented in modular form, for possible expansion, and comprises two main areas, a room that has the flexibility and space to be converted into a livingroom, and a semi-outdoor kitchen, which serves as a veranda while maintaining a concept of convenience in the use of space, and integration with the outside environment. The waters of the roof is collected and stored in two barrels for later use.

2. Land cement is a mixture of earth and concrete, which serves as a thermal insulator, is resistant structures with modest volumes, and the cost is very low, since land is a material that everyone has access, and labor can provide the same user of the structure (does not require specialized labor).

3. Welded wire mesh: a common and inexpensive material that can serve as a container of filling the walls, and provide the texture needed for subsequent application of breeches in if needed.

4. Foundation stones: the economic and in many cases on hand at the construction site.

5. Yagua panels, such panels can be produced in situ, as it is a material from nature (Palm) and are extremely lightweight. Usually this part of the palm is not traded, but discarded.

6. Dried bananas panels: the panels are made by cutting the trunks of banana (usually rejected), dried in the sun for five days, and tied in modules of 90 cm by 50 cm, like a raft.

© All rights reserved to: ken_arch 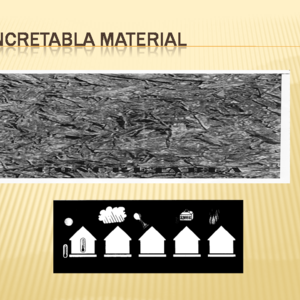 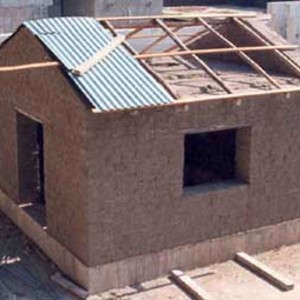 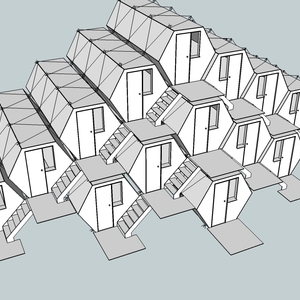 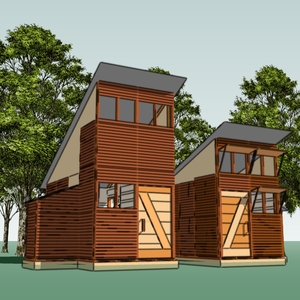