I tried along my work to merge between number 24 and overhead kick (bicycle kick) with German flag colors and others additional colors and I used also some icons and symbols (heart, flower..). Why number 24 in first attention? Because, 24 nations and countries, 24 teams, 24 players, actors and stars on the green carpet. Someone of you will say: heey! 11 x 2 make 22 not 24 … my answer is: what about the twelve’s player, fans, supporters and you. Can you imagine a football party without thousands of fans in the stands? No way! Why overhead (bicycle) kick? Because it is the most spectacular skill in football. In addition, euro was and will be full of skills and beautiful moments. Why I placed the ball in where it is? To bring motion to the logo and also, at this moment, when the ball receives a magic touch from player’s foot and take direction to it goals, at this fraction of a second all the lovers hearts stand up. What a felling; emotional, euphoric… that’s why i added to the logo some hearts and icon of celebrating fans. Why blue flowers? Because in Germany the national flowers is Centaurea Cyanus characterized by a beautiful and special blue. I am not from Germany but I think German (people and authorities) have and still welcome and hosts millions of Europeans and all peoples with opened arms and flowers.

An original design with creative calligraphy to make number 24 look like silhouette of overhead kick from a football player.

The client wanted reference to football and the European Championship and Reference to Germany as a friendly, cosmopolitan host .i used an original calligraphy to make number 24 look like overhead kick from a football player. Moreover, i added hearts for love, flowers for hosting with fresh and bright color of Germany flag (yellow: fresh, energy _ red: love, passion _ black: elegance, power _ grass green: Germany land).

The events in Germany are unique, different, fill with love, passion,… and I think my logo reflect that by an unique and original design with merge of ideas I think never seen before, I hope that :)

© All rights reserved to: Amine A 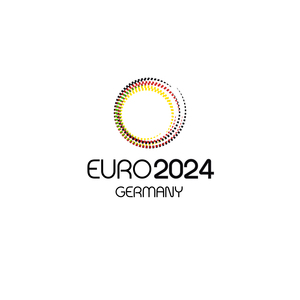