A PARADIGM SHIFT-- My idea requires a shift in the way we think about the relationship between companies, consumers, and the environment. It is not necessarily true that using resources is always going to have a negative impact on the environment. If the entire process from beginning to end, it is possible for a business to have an overall positive effect on the environment, rather than a negative one.
By changing the source of the raw materials needed to manufacture their paper cups, and the way their "waste" is ultimately processed, Starbucks and its customers can reduce global warming by permanently sequestering large quantities of carbon dioxide and at the same time increasing soil fertility, can help create jobs and halt soil erosion in some Third World countries where the pulp-making materials would be grown. All this without making consumers change their behaviors at all. All this done with already existing technology. Please read on.

WHY BAMBOO?  Bamboo is grass: very large, woody, extremely fast-growing grass that grows on every continent except Antarctica. Bamboo produces 3 to 7 times more biomass per year than even the fastest-growing trees. Unlike trees, bamboo regrows after it is cut (think giant lawn), yet bamboo requires very little water and no fertilizer or pesticides. This makes bamboo plantations far more sustainable than tree plantations.

In fact, all the disposable items commonly found in restaurants and coffee shops should be replaced with bamboo-fiber supplies.

CHANGE THE ULTIMATE DESTINATION OF USED PAPER CUPS:   The post-consumer fate that I have in mind for these disposables is the really unique part of my idea.

Here is what would happen to bamboo disposables that have been put in specially-designated containers. These containers should be placed all over the community, so Starbucks would end up "sponsoring" recycling in the communities where it does business.  The only behavioral changes required of consumers would be to learn to put their discarded items in the appropriate receptacles: glass, metal, plastic, paper, wet, organic compostable material, or trash.

The eventual fate of these containers would be that haulers would pick up the glass, plastic, and metal, and transport them to recycling facilities. The compostable food wastes would be transported to a composting facility.

THE REALLY EXCITING NEW TECHNOLOGY THAT PERMANENTLY REMOVES CO2 FROM THE ATMOSPHERE. A MOBILE UNIT WILL BE COMING SOON TO YOUR LOCAL STARBUCKS! AND THEN AGAIN ON A REGULAR SCHEDULE! WATCH AS IT REDUCES GLOBAL WARMING IN FRONT OF YOUR VERY EYES!

Most exciting of all, and at the very heart of my proposal, would be that the paper waste of all kinds would either be transported to a nearby pyrolysis facility, or a mobile pyrolysis unit could make scheduled visits to businesses. In a pyrolysis unit, waste is cooked at very high temperatures in a nearly airless chamber: this process is called �pyrolysis. � Regular combustion, which occurs in the presence of oxygen, releases heat and carbon dioxide, thus increasing the amount of atmospheric carbon dioxide.   In contrast,  pyrolysis yields syngas, a very high quality fuel; bio-oil, which is similar to crude petroleum; and biochar, a very stable carbon-based material which is extremely resistant to decomposition. Nothing else! No pollutants are produced. Any dry organic material can be pyrolyzed, including: paper, newspaper, old magazines, paperboard, cardboard, wood, sawdust, cotton rags, tree trimmings, leaves, etc. The market for recycled paper is very poor, and it is fairly common for paper that has been collected for recycling to not be ultimately recycled because there is no market for it. Turning used paper to biochar may actually be the best use for it.

The University of Western Ontario is developing a mobile pyrolysis unit which should be commercially available by the end of 2010 for a cost similar to the cost of large farming equipment. The unit fits on a trailer, and can be run by a single operator. This unit turns waste into biochar, synfuel, and bio-oil in a matter of seconds.)

PERMANENT FERTILIZER. PERMANENT CARBON SEQUESTERING.            The biochar is not just  a byproduct, it is actually the main product.  It is a powerful, active material that can transform even the poorest soils into rich, fertile, productive soils. There are biochar-enriched fields in the Amazon which have been fertile, productive, and sequestering their carbon for more than a thousand years. Nearby soils that have not been biochar-enhanced, are nearly sterile and devoid of nutrients.

BAMBOO SAVES THE THIRD WORLD. Bamboo plantations could even be established in very poor countries which desperately need income, thus greatly improving the standard of life in these countries, while at the same time, increasing global peace and stability. Bamboo would be an especially good crop in areas where the land has been deforested and the soil is impoverished- no land should be cleared especially for bamboo-growing purposes. (USAID has already established a bamboo-planting project in Haiti, because bamboo can quickly stabilize easily eroded streambeds and hillsides. Mud- and rock-slides kill many people in Haiti every rainy season because the deforested mountains are so unstable. Haiti�s forests were cut down, by the way, for firewood. So if Starbucks wants to really close the circle, it could build pyrolysis plants in Haiti as well as in the U.S., so syngas and biochar made from bamboo could benefit Haitians at home. Small biochar units have been designed that are suitable for use in developing countries. In 2004, these units cost approximately 300 euros to build.)

STARBUCKS AND ITS CUSTOMERS SAVE THE WORLD, ONE CUP AT A TIME.    Since bamboo grows so much more quickly than almost every other plant on Earth, it is capable of removing a large amount of carbon dioxide from the atmosphere every year. If more bamboo is being planted, so it can be made into paper cups, and those paper cups are then turned into biochar, a huge amount of carbon dioxide could be locked up in fertile fields for the next thousand years. This project, if implemented, could actually make businesses carbon negative, rather than just carbon neutral. The amount of carbon sequestered by each Starbucks cup, grown from bamboo and ultimately pyrolyzed, could be tracked, and the information could be used as a marketing tool: "Starbucks customers have removed_______tons of CO2 out of the atmosphere this month!"

So this whole �replace the paper cup� project is just an excuse for me to try to convince these big, powerful, wealthy entities that it is in their best interest to encourage, and even subsidize, the establishment of bamboo plantations to be used for paper-fiber production, and also to subsidize the construction of pyrolysis plants to deal with their post-consumer waste.

© All rights reserved to: ellensandbeck 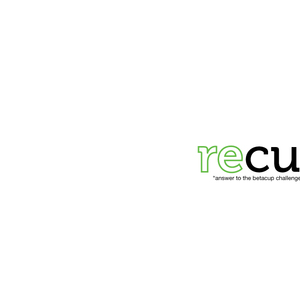 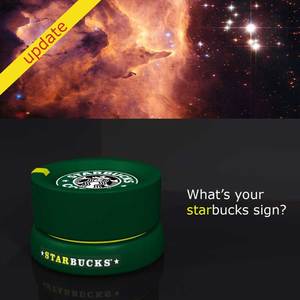 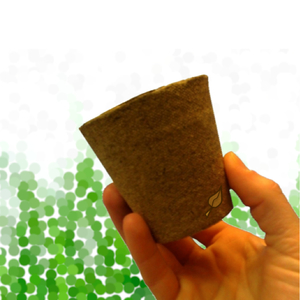 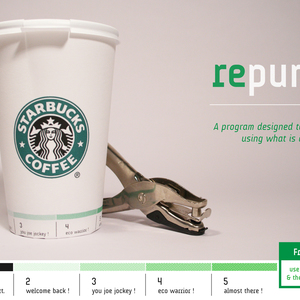