The Vilocity Drink/Think canister (Vilocity canister) is a reusable coffee container that utilizes social awareness and group conscientiousness to encourage environmental care--likewise providing savings to participating vendors (in the form of reduced waste) and consumer analytic data for targeted savings to loyal customers. The uniqueness of the Vilocity Drink/Think canister are summarized as follows:

Each Vilocity canister is tagged with a unique barcode (ID) that links to an online account. This online account severs the primary vehicle for information storage and exchange between consumers and vendor participants--information such as but not limited to purchase date and time, points accrued, amount spent, coupons available or redeemed, etc. This ID functions similarly to loyalty programs offered by other retailers. Each time the barcode is scanned, information is recorded at the �Go Green! Beans� online account, resulting in point accrual. (Use of points will be discussed below.) �Go Green! Beans�will be a new internet database created for the purpose of exchanging information between user accounts and retail participants.

The online account is (optionally) linked�via an app�to social networks, such as but not limited to Facebook. When the canister is scanned at a local, participating vendor�in addition to accrued points�a status update posts to the user�s feed informing his/her broader network community of the effort to go green, and �speed up savings for the earth� (hence, the name Vilocity). Individuals can invite virtual friends to compare �green savings��with pace leaders identified by the number of disposable cups saved and points accrued through regular reuse of the Vilocity canister.  The constant update on who has saved the most will be a community-inclusive challenge that will play off the achievement-accomplishment model of many online games popular among the 18-45 year old range.

Accounts can also be linked (optionally) to the specially designed Wii �Go Green! Beans� interface, where users can see how much waste they have reduced through a variety of actions and behaviors, including use of the Vilocity canister. Games already have the ability to be linked to online accounts and other users. Taking this a step further, the �Go Green! Beans� Wii interface would communicate with the �Go Green! Beans� online database. The information retrieved would be passed on to Wii Fit, generating reminders like, �You have had four lattes this week. It�s time to work out.� Or vice versa, where calories burnt through the Wii Fit results in points being added to a user�s �Go Green! Beans� online account.

How would the Wii Fit know what was consumed? The number of points earned by a user  for a particular purchase would correspond not only to the size of the canister saved (i.e. waste reduced), but the value of the purchase (e.g. a latte is 100 points, but a drip coffee is only 25)--thus bringing together traditional points-for-purchase loyalty programs and the rewarding of environmentally sound practices.

Points earned through the use of the Vilocity canister can be redeemed with affiliated vendor companies--such as but not limited to Starbucks and Dunkin Donuts, but also QT, Shell, BP, or other local establishments where coffee is served. Alternatively, these points can also be redeemed as currency or awards with online gaming interfaces--such as but not limited to Farmville (with over 81 million monthly users) or Mafia Wars (which has over 25 million monthly users). Additionally, vendor companies can �advertise� through featured actions or assigned tasks in these virtual worlds�encouraging users to obtain more points for their �Go Green! Beans� account, find real-world coupons, or free promotional items.

One problem with currently available reusable coffee mugs is forgetting to carry them. I call this the �unused reusable problem.� The social aspect of the Vilocity canister addresses this issue by encouraging users not to leave home without it. Specifically, immediate savings, point accrual, and future point redemption depend on having the system in hand at the time of purchase.

A further incentive would be the unique offering of immediate, on-site savings, for Vilocity canister carriers. The Vilocity canister would come with an antimicrobial, non-submersion lid that is Bluetooth enabled. This identifying feature would communicate with local ports at participating vendor locations, triggering a unique coupon savings code immediately to the consumer via cell phone short message system (SMS). For example, I stop to fill up my car with gas. I see the universal Vilocity port sign at the local gas station. Taking my cup to the scanner, the Bluetooth signal triggers the system to use my (online) registered cell phone to text-message a coupon for a free item with a coffee refill at that location during that visit. Seconds later, my cell phone vibrates with the new message, which I show to the associate for my instantaneous savings. (Another expression could be to have the code auto-loaded into an embedded microchip, with savings generated at the time of purchase.) This antimicrobial lid, while not yet in existence, incorporates a variety of existing technology into a completely new product and design for a new expression of usefulness.

Participating vendors can increase customer loyalty and rate of return based on the value and frequency of the savings codes generated. Hypothetically, were McDonald's a vendor participant, consumers could scan their Vilocity canister at a McDonald�s location and get a free Redbox rental with a coffee refill. Likewise, if BP were a vendor participant, consumers could scan the Vilocity canister at BP, and get a candy bar for 25 cents with purchase of a coffee refill. (These examples are meant to demonstrate practical expressions, but do not imply current or future endorsement by named corporations.)

In each case, consumers receive incentives to carry the Vilocity canister--the �unused reusable problem�--even as vendors differentiate themselves based on customer loyalty. Each time the Vilocity canister is scanned, a savings would be generated. Participating vendors can monitor, augment, increase, decrease, change, or cancel the types of coupon codes generated by setting up comprehensive reward structures (based on time of day or frequency of an individual user) via the vendor side of the �Go Green! Beans� database. Each scan would generate a savings code, though the level and value of those codes could vary based on the desires of the particular vendor.

Why create a "high-tech" lid, when so many people already have wireless-enabled communication handsets? Incentivizing the carrying the Vilocity system is essential to its success. The more the benefits of the system are linked to patterns of behavior, the greater the reduction of waste.

A second problem with other reusable coffee mugs currently available is their limited use. A Starbucks mug does not save consumers money at Einstein Brother�s or McDonalds, and vice versa. (Mention of Starbucks, McDonald's, and Einstein Brother's is not intended as a current or future endorsement, but simply a real-life example of available single-location mugs.) However, the Vilocity canister could be registered at any participating vendor, resulting in instantaneous savings for the consumer and online points for later use. Much like the universal USB charger is designed to reduce redundancy and eliminate waste, so the Vilocity canister would reduce the redundancy of having a reusable cup for each vendor, and would allow for multi-location usage for consumers. Sale of the Vilocity canister would not be limited to a single vendor, but could be designed and branded by each participating vendor. Consumers could then self-identify their Vilocity canister based on the vendor of greatest affiliation.

A further benefit of a vendor consortium would be the analytics available (at varying levels) for participating vendors. Spending patterns and coffee consumption of consumers are easily tracked, providing consumer habits to vendors. Based on the level of buy-in, a vendor could be granted full access to consumer analytics (e.g. time of purchase, size of purchase, etc) or only partial access (e.g. location and/or date). Analytics do not simply say how much, when, and what consumers drink--it also tells vendors when to stop wasting fresh water to brew coffee that isn't going to be consumed. (Starbucks already took a step in this direction when it stopped brewing decaf after the morning period.) And while trash is a significant environmental issue, the availability of fresh drinking water is by far a more universal health concern. Combining ways to reduce waste and water has greater benefits across the board.

Nevertheless, consumers who desire to opt-out of analytic tracking may do so through their privacy settings in their �Go Green! Beans� account. However, the more restrictive the privacy settings the less able vendors are able to communicate targeted savings to individuals--thus reducing the benefit to the consumer. The actual value of the analytics would inform participating vendors (and their umbrella corporations) of best practices and most effective use of awarding points and offering instantaneous savings..

What would discourage one person from buying four or five Vilocity canisters, actually increasing the �unused reusable problem�? With the Vilocity �Go Green! Beans� system, users can register as many canisters per account as desired. However, full point credit per canister begins to decline with the third registered system. This allows for spouses to share an account, or for a user to replace a lost or worn out canister. But, when a user registers a third canister to a single account, the point accrual is actually reduced by tiered percentiles. Chronic canister losers or abusers would not be rewarded as much as those who used the same canister for a longer period of time and more regularly. Inversely, point awards would actually increase the longer a canister is used at participating vendors.

Overall, the Vilocity Drink/Think canister would drastically reduce waste, and increasing corporate savings, through a system that is universal and rewarding�resulting in recognition among users. Through the utilization of the existing technologies of social networks and SMS�as well as through simple redeployment of Bluetooth capabilities�the Vilocity Drink/Think canister is an engaging, socially aware, group conscientious project.

V=D/T. The fastest way to save the environment. 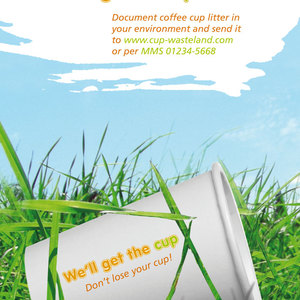 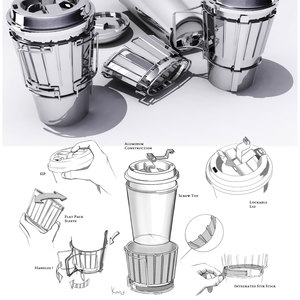 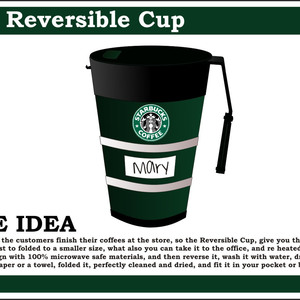 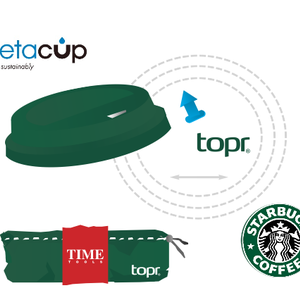