Supermarkets like Lidl put in front of your eyes products and expecially meats as if it were gold plated, but below there is rotten things and bad stories. I'ts time to scrape away the "golden patina" and see the truth!

This is a very cool Idea, it could work as a poster where a hand - as in your visualization - has already scratched off a bit of the gold, but also as a gimmick for a campaign, in which people could hand out scratch cards in the street, the public may think they will win something from Lidl - and then the truth hits home. Well done!

I just have one or two remarks in terms of 'content': One is that the maggots on the meat suggest that Lidl sells rotten meat, which is a statement we can not make - it would be great to find an equally impressive image behind the golden patina that refers to secondary effects of factory farming, like deforestation, pollution, health risks etc. The second one is that it would be great to see a reference to Cheap Meat products and/or their advertisement (maybe a reference to Lidls's cheap meat brands, or a slogan?) on the visual, something you see before you scratch off the gold, and maybe even still afterwards - just to make sure that it is really clear what we are talking about. I think this could easily be implemented, and maximise the effect of this surprising campaign method!

I made a comment under the Briefing today where you can maybe find a few helpful points to tweak this Idea to the max? :)

Thank you for participating here and nice to see you on another Project!

Dear Jana, thanks for your suggestion! I've make a new update, focus on the health of the animals. what you think about it? I'm working too on other "golden patina" solutions, stay tuned! ;-)

Hey Tommaso, I preferred the gold with the Lidl logo on it! Also, the maggots were a super harsh contrast to the lovely gold - an equally contrasting photo instead of a sad-but-still-cute pig might work better? Just be careful not to put stark depictions of animal suffering. Maybe there could be more varieties of different negative effects behind the gold? What I mentioned before is still important: that the card or poster communicates that this is about Lidls or Aldis cheap meat and how they market it as something great while it is actually really bad news for the planet, animals and us. :)

Thanks for the Update!

Great update Tommaso, It's a little fast though. What if the hand paused for a beat after uncovering the head, and then continued.

Update! instead of showing a sad pig behind the patina I opted to show the symbols of the consequences behind the cheap meat. better?

update my friend! what you think about it? :-)

Nice idea Tomasso, one suggestion change the font at the poster..:)

thanks for your kind suggestion! update done! ;-)

Very cool idea, Tomasso! I like how you made the associations!

thanks so much for the love my friend! :-D

Wow!!! This is such a great concept Tomasso, I think it fits right on the brief!!! I think maybe the slogan can be stronger, but the visual speaks strongly! Looking forward to see more of your work :)

The message is clear very quickly! Very creative and bold idea, it would defintely drag my attention.

Thanks so much for your kind words!

Wow, amazing idea and update, Tommaso! One of the best:)

Thanks so much my friend :-)

I like your idea Tommaso! It is very interesting and clear

nice idea , gif very good but poster Not the same

Congrats for the halfime award!

Congrats, Tommaso you deserve it

Congrats, Tomasso! Cool interactive campaign with big surprise;) Do you still work on the visuals, can me more vivid/ impressive?

Now, your update is impressive ;) Your idea is very good, because of the flexibility and variety of the images to choose !

I like the Update! I think if there is just a normal piece of meat as the first image behind the gold, it would be great! Then, progressively, the layers could get more abstract. The bloody money is not really 'explaining itself' and the pills may be tricky, but how about in this case, adding a not too awful picture of a real industrial pig farm?

Very very beautiful idea I wish you all the best

Aybars Senyildiz
over 2 years ago

Isis Romano
over 2 years ago

Gustavo Moncada
over 2 years ago

Piotr Wycichowski
over 2 years ago

Sani
over 2 years ago

Elif Ezgi Erdem
over 2 years ago

Tia
over 2 years ago

Iván Santiago
over 2 years ago 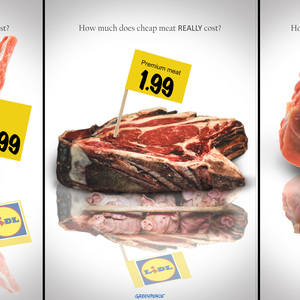 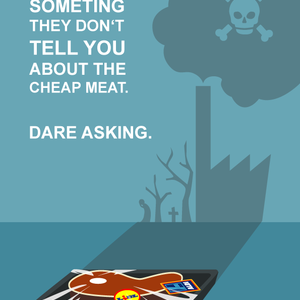 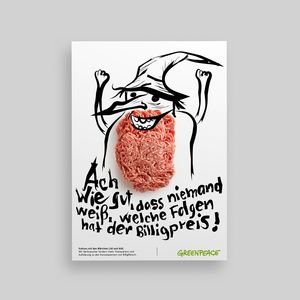