We followed an unique way constructing the campaign by playing with words and names of brands. We also maintain their visual brand identities in our poster and message to attract audience and to show whom we are demand from. In addition, we carefully try to provide a right tonality which is not aggressive with questioning these brands in the messages like "all the truth = aldı truth ?" "little cheat = lidl cheat?". And we finally add a demand text that clarifies the aim of this campaign.

English version of the campaign.

© All rights reserved to: tolga, şükran

Diana Jianu
over 2 years ago

Before my colleague, Jana, jumps in with feedback and support on the content of your idea, I would suggest to either zoom into your picture more, or simply make the posters bigger. The small text is very hard to read. And that is a pity, because it is very important. And very good! ;)

I hope this helps, Diana

It is nice to see you and we agree with you. We are on a business trip now, when we turn back, we will show the details or closer shot of current design and possible new implementation and scaleability ideas. We wanted to submit the idea as quick as possible to have some feedback from client and the creatives here. Hope everyone likes the idea:)

Jana Franckeguide
over 2 years ago

I agree with Diana, first of all.

The second thing is that the campaign should work in German, as I pointed out in the Client Feedback Comment under the Briefing the other day. As your Idea is based on a play on words, in this case, it'd be important to show a German version as well. ALDI ('all die' means 'all the' in German) works in German, too, but for Lidl, maybe you have an Idea? Let me know if I can support you with finding a translation where the pun still works!

Generally, your approach is really clever and the posters look well composed and on point! Thank you for your Submission!

Hey Jana, now we are back with our update! Thanks for the contribution and the valuable feedback.

Thank you very much oanamm! :)

I can't read the small text, but if I understand correctly, the small text is there to explain what the supermarkets are not telling you. I think this is a clever idea! The big text acts as a teaser, teasing the viewer to read the smaller text. It works for me :-) It could work as a poster, and maybe also as an image that can be shared online.

Glad to hear that ! Thanks a lot AyalPinkus! We will re-arrange the visuals for readability also :)

Magda Lechowicz
over 2 years ago

This is my favourite one so far. Very catchy, I love the play on words. It works as something you'd expect to see from Greenpeace too and fulfils the brief which is to put pressure on the discount stores and raise people's awareness of the issue. I hope a German speaker can help create German versions!

This comment made us so happy! Nice to see that our work is understood and loved easily. Thanks a lot Magda!

Jana Franckeguide
over 2 years ago

Yes, it would really make sense and be cool to find German versions! I hope you two will continue when you are back from your trip!

tolga tuncerowner
joyleen
over 2 years ago

Thanks joyleen, nice to hear from you.

lemo
over 2 years ago

tolga tuncerowner
lemo
over 2 years ago

Hi lemo, It is great to see you comment :)

Thanks a lot for the support:)

Felix Finger
over 2 years ago

really good!! Like the Aldi-poster a bit more than the Lidl one :)

Zsolt Szász
over 2 years ago

Really good word plays, both German and English. Would certainly make a great campaign, like it a lot!

Tia
over 2 years ago 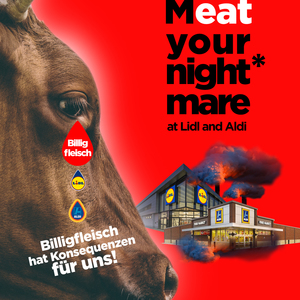 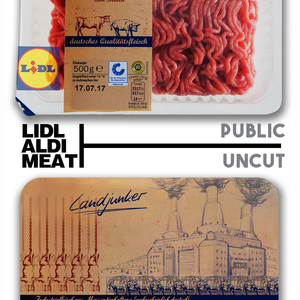 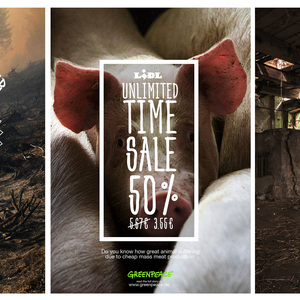