Read the BriefSee all IdeasCreatives
Greenpeace against cheap meat
Viewing published ideas, sorted by popularity.
previousoverviewnext
Show #TheRealCost
Nothing is more striking than the facts.
1/3
123
1/3

I was really surprised by the actual harm of "cheap" meat. So was everybody I shared the facts with. Most people just dont know or think about its true cost. Thus I decided to go with series of visuals to share facts and get other people struck, too, in order to provoke a change. Playful visuals ,with Lidl and Aldis significant price tags, catch the eye and emphasise the issue, contrasting with its seriousness. The tagline can start a conversation and emerge as a viral awareness campaign.

Other visuals of the series and an example of a guerilla sub campaign. The same price tags from the key visuals can be put as temporary stickers on street art that depicts meat or animals. The key visuals can work online as still images or GIFS, as well as offline - posters, city lights etc.

© All rights reserved to: Elle 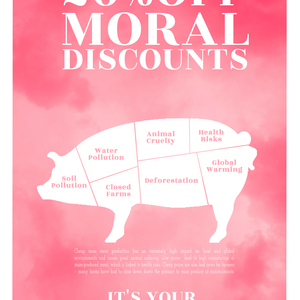