Coca-ColaRead the BriefSee all IdeasCreatives
Coca-Cola Design+ Award
Viewing published ideas, sorted by popularity.
previousoverviewnext
stack it!
stack it! - Bringing Coca-cola to take part in the intimate space of family

Why is Coca-cola always red & white? According to me, the brand equity of Coca-cola is already strong. The brand awareness has been built and embedded for decades.  A lot of people around the world knows this brand. Now, it�s time for Coca-cola to expand their horizon and start �coloring� the world.

This design is inspired by one of Coca-cola visions which is emphasizing in inspiring moments of optimism and happiness. We can see that Coca-cola is encouraging the spirit of cheerfulness. Through this statement, I generate the idea for the crate design and I called it �stack it!�. The design strategy is simple, bringing colourful crate to take part in the intimate space of family. I believe this strategy will bring cheerfulness in consumer living space and bring Coca-cola closer to its consumers. As a part of an interior objects, ��stack it!� crate can also function as a decorative element or partition, not only for home but also for cafe, bar, restaurant, party and many more.

�stack it!� crate basically forms a square shape and contain 9 bottles of Coca-cola. This shape is considered as the most effective shape that can fit in most housing space. This shape is not only engineered for operation and distribution efficient  but also designed to spark the interaction between the consumer and the crate. �stack it!� lets the consumer to arrange the crate creatively by themselves. The crate can be arranged in two ways, vertically and horizontally. This horizontal and vertical stacking provide flexible adaptation to fit in consumer living space with interlocking rail slide in each side of the crate to maintain the stability.

Pertaining eco-friendly material, I see the design from the durability perspective. The more durable the crate, the less environmental damage will be caused as it will be less crate production. For the material, I consider to use conventional bottle crate material which is High-density polyethylene (HDPE) or PVC that recyable.

I�m  aware that this design will not be using less material, but i assured that the lifecycle of the crate will be longer. Besides, I realize that this design may not fulfill one of the requirements, but it�s a design that I believe will fulfill the spirit of Coca-cola which is bringing happiness.

© All rights reserved to: inafla 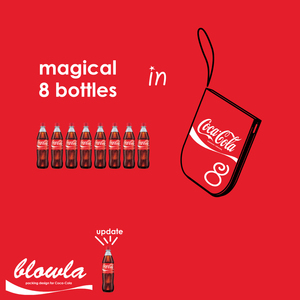 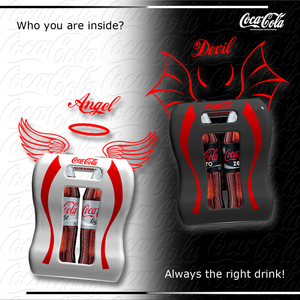