Read the BriefSee all IdeasCreatives
Create Your HERO!
Viewing published ideas, sorted by popularity.
previousoverviewnext
Bek & the Lieferheld Cycle
Sometimes is good to stay home and don`t cook. Bek Lieferheld is ready to take care of the rest.

Act 1
Rebeka Lieferheld is a 20 years old Berlin girl who has been diagnosed with AGORAPHOBIA a condition where the sufferer becomes anxious in environments that are unfamiliar or where he or she perceives that they have little control. Triggers for this anxiety may include wide open spaces, crowds (social anxiety), or traveling (even short distances). Agoraphobia is often, but not always, compounded by a fear of social embarrassment, as the agoraphobic fears the onset of a panic attack and appearing distraught in public.

This is not a problem for her except for 2 things:
1) The pain in the ass his grandfather becomes when he starts talking about the importance of being a Lieferheld. (having "Delivery-hero" as last name i
means you have to deliver food for a living, and with the agoraphobia Rebeka cant fulfill his grampas expectations) Anyway she doesnt pay too much attention to the old guy...<br>2) The imposibility to touch the cute guy who lives at the front building, another one like her, a geek engineer who spends hours on the computer and asks everyfood for delivey... she sees him everytime he does it.<br><br>One night grandpa arrives with solemnity and asks Rebeka to stop chatting on facebook and pay attention... "it is time" he said ...&nbsp; Rebeka turns around and sees granpa giving her an strange symbol with a yellow "L" attached to a single normal key.<br><br>The moment she touches the symbol an amazing Steampunk Bicycle, appears there in the middle of the living room... a strangely modified lighten metal steam powered cycle. Inmidiatly she noticed the recycled parts from the junkyard two blocks away... a place she has only heard about. But she Loves recycled stuff.<br><br>&nbsp; &nbsp; &nbsp;&nbsp; Listen to me stubborn girl... - granpa said-&nbsp; the doctor has told me I can no longer be a delivery guy... that I have weak bones and many other things from aging... the point is this: is the Family secret, an incredible miracle of the inventive and engineering&nbsp; the Lieferheld Cycle.<br>-it can keep all food Lieferheld delivers warm an nice thanks to the steam generated<br>- it is imposible to get tired on the Lieferheld Cycle<br>- it is unbreakable<br>- it becomes invisible and visible when a Lieferheld touches the Symbol on the keys (logo)<br>- It has GPS<br>- It has the best restaurant and food services database in all Berlin<br>- Good restaurants feel happy when it is around<br><br>Rebeka inmediatly rejected the offer!!! her agoraphobia!! it was imposible for her... <br><br>Granpa got closer to her as if his next words would change her life forever:<br>"Remember my child the good feeling it is to be home, to call for food and have it delivered to your door, well... it is time you bring this joy to everyone... with this Cycle you would deliver it FASTER and SAFER than anyone else...<br><br>Rebeka found wisdom in his words for the first time, but anyway... it wasnt enough to make her go out!!

but then... grampa said deeply:
- "that way you will touch his finger every day
every pizza, sushi, hamburger or chinese... that way he will love you"

...From that day Rebeka called herself Bek, and everytime she has to deliver something she put herself a red wig and an spectacular steampunk outfit she made for a manga convention when she was 17...  and fights her agoraphobia with all her soul... innocent to the secret behind her disorder

from that day, every time she delivered something, she was free 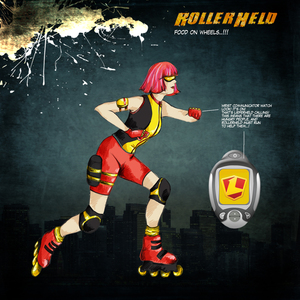 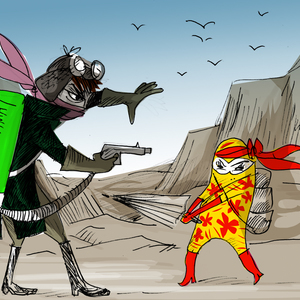 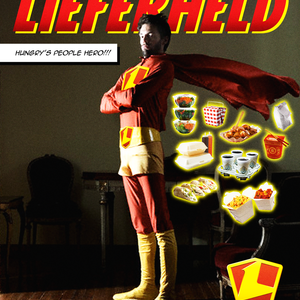 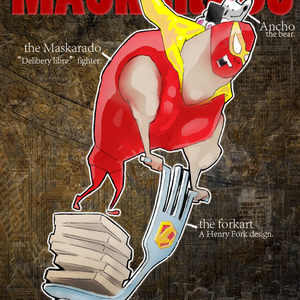