A suit as a metaphor of our feelings related to our perception of life. How to taking a "depressive suit" off requires a lot of attention and cooperation.

gusmery paredes
over 5 years ago

Ivan excellent idea, understand that change in attitude can determine the radical change in life and raise it as a change of clothing seems excellent analogy. Thank you for this beautiful work.

Piotr Wycichowski
over 5 years ago

Thanks a lot, Peter

Oleksandr Galeta
over 5 years ago

Bert Schipper
over 5 years ago

Hi Iván. Here I am. It's, I think, the fifth time I´m looking at it. I know you are a great illustrator. But I miss one thing. Without the logo's it's not clear that it is about depression. But maybe I'm the only one here. Maybe the difference between the b&w and colored part is too soft. I think the girl must to be in real b&w. But maybe I am wrong here. Did you try it!

Thanks, Bert. I appreciate it. Yes, the girl in the first version is almost B&W and the background more colored, maybe she should be totally B&W. The second one emerged from an accidental attempt which liked me because of cold aura behind the girl in contrast to warm hues of background. That reinforces the idea that she needs to take her "cold suit" off so that her next scenary can become in spring. I try to capture this just in the moment she is taking it off in order to see the change. It is a metaphor about we have to change inside out to get over a sort of depression. As you say, the issue is some difficult to materialise without logos and texts in all contexts and proposals. I had thought using logos was a mandatory requeriment because of that. I will be doing more experiments. Really I appreciate your views at all. I will waiting the feedback :) 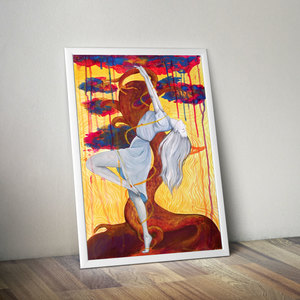 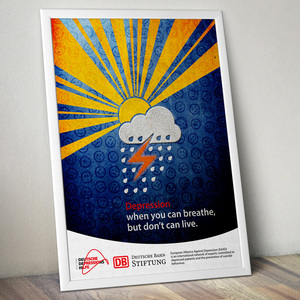 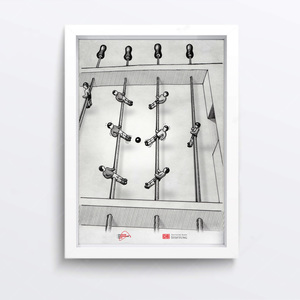 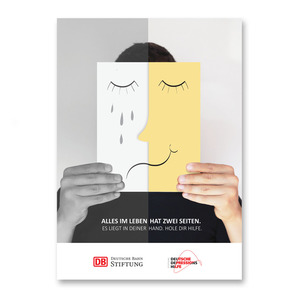