This technology is aimed at irrigation purposes from a canal system. Bihar, as the case taken in this challenge, has 15 Irrigation canal schemes for supporting the agriculture of the state. The original idea was developed for the purpose of power generation. Artificial  Vortex  (ArVo)  Power  Generation  is  an  innovative  run-of-the-river  (without  dams) hydroelectric power generation scheme that effectively extracts kinetic energy from flowing water producing 100% green electricity. By using vortices the flow and head requirements for power generation is brought down remarkably. ArVo  power  generation  scheme  utilizes  the  natural  tendency  of  whirlpool  formation  of  fluids  by defining  a  new  flow-path  thereby  causing  a  turbulent  spiral  movement  of  fluid  layers.  In ArVo power generation the kinetic energy of flowing water is concentrated using a powerful gravitation water vortex in a rotation tank (ArVo tank). This kinetic energy is focused as rotation energy to the turbine which is coupled to an electric generator to produce electric power.

The requirements to set up an ArVo plant is available at every canal fall and there would be many such falls in every canal system. Click here to see the working of an ArVo power plant at a canal fall in Kerala having a head of 70cm. Such a plant can be utilized for power generation that could in-turn be utilized to run an electric pump-set.

Alternatively, this basic technology can be redesigned so as to use the rotational power of turbine directly to run a piston or an impeller of a pump-set by means of gears. Such a design will be recommended as the losses owing to conversion of mechanical power to electrical and back to mechanical can be reduced.

This technology can be utilized in a smaller format so as to attach it to the outlet of a conventional pump-set to improve the overall efficiency of the arrangement. Such an arrangement will be portable. The other requirements (Robust and locally serviceable,Cheap enough to be able to compete,Sufficient pumping performance to water a typical small plot) are met by this technology in its present format.
The other features of this technology is as below,

See the working of the technology in the following links.

© All rights reserved to: Point5

Cool idea. Only issue is with farmers who don't have access to a river or body of water that is moving.

This might not be so precise a solution to the problem dealt within this challenge, however this technology can trap the immense unharnessed hydro potential of India. We are looking for support in taking our work forward. Anyone interested in our work do contact us. Email: arvopower@gmail.com Ph: +91-9895252674

much work to do!

ramesh
over 6 years ago

There is indeed much work to do. We have to build a structure and setup other equipment. However, we don,t use any costly equipment in this technology. Everything needed is easily available in any village in India. The structure is a modified one from irrigation wells. The crude turbine designs can be manufactured in an ordinary engineering workshop. The maintenance to this is very much less owing to uniform distribution of loads to all the blades of the turbine at any instant. Another worthy thing about this technology is that vortex flow indeed purifies the water and re-energizes water with increased amount of dissolved oxygen. Fish migration is also not hindered as there is no nozzles involved to shoot a jet of water onto the blades, making it purely green.

Davide Rino Rossi
about 6 years ago

parvathi
about 6 years ago

With a head of 1m and a flow rate of 25 liters per second, We expect an output of above 500W. check the video link in which with a head of 70cm and less than 25 lps flow, we have generated more than 150W with a 30% efficient alternator (tested in lab).

chandrasekaran
about 6 years ago

prerana
about 6 years ago

good design and Alternative part is good too. 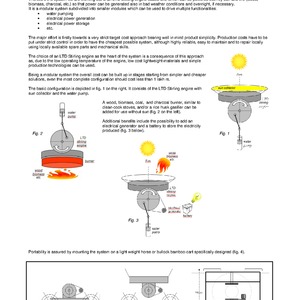 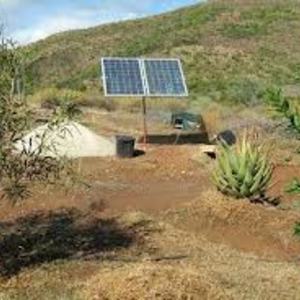 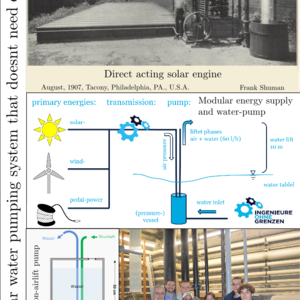 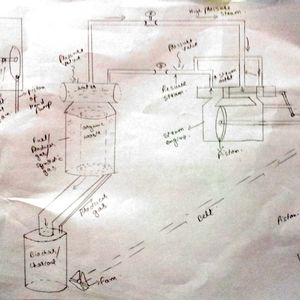