Character: how great would it be if you could come home and either be in an entirely white, completely open space or find yourself in a small scale house which consists of a warm and colorful series of spaces?

To achieve this the meaning of a �door� is stretched endlessly. Each door in this proposal has two entirely different sides: one side coated in high gloss ice cold white, the other side covered in hand colored felt from the wool of a flock of sheep from the northeastern part of the Netherlands. Some doors just rotate, others rotate first and then unfold once or even twice to double or even triple up.

All doors closed, all stuff stored. The doors showing their white side.

Dynamic state (1), space savers: four space savers are included: a desk, an extendable table like the Goliath and two times a wall bed.

Dynamic state (2): space transformers: doors open and close offering a multitude of spaces, all different both in pragmatic sense and in character. The doors would be made out of only 4mm thick extremely durable laminate with superior rigidity. One side painted in high gloss white, the other side covered in colored felt. The doors would rotate and be guided by a beautiful curvaceous railing system. Small levers integrated in the end side of the doors would make it possible to fixate them in every position possible.

To each his own, to some more than once.

© All rights reserved to: remco

Hi Remco. I'm not sure if it's just my computer but none of your images are showing up at the moment.

Thank you for noticing. A couple of days later a developer of Jovoto found out this was due to some images being uploaded as CMYK instead of RGB. And then this only happened to people viewing my submission in IE8. Chrome, Firefox etc don't have this problem.

Good to see someone placing equal or greater importance on spatial qualities as opposed to quantities.

I was excited by the idea of coloured, felt-lined spaces (less so by the featureless white space, which sound like it could come with a straight-jacket), but found the realisation somewhat less cosy. Maybe it's the diagrammatic nature of the images, but I found it difficult to read the different 'characters' of these spaces. Would love to see a detail of the inlaid curved rail system - that could be very beautiful.

And major design geek points for using the modulor - it may be less obvious, but you will also find many multiples of 432mm in our design!

I liked your project a lot, gave it a high rating. Loved the physical model & also the technical black & white perspectives. In representation technique for my taste a bit to much leaning towards Japanese Bowwow/Sejima/Nishizawa influences, but a truly refreshing submission amidst a sea of high gloss rendered interior decoration proposals.

I also liked the way you guys organized the apartment by dividing it in 2 spatial entities along the longitudinal axis, also very original. - Remco

Complicated movements, may be if you choose the important ones.The atmosphere is magic.

my best mark to your project!! very artistic and elegant project! what's good - you suggest the "way", which may be copied in other places. nice to see the different from hundrents "sweet-white-slim-similar-mannered" renders here)))))) good luck!!

It's great to hear you liked it. & you're right there's little abstraction/suggestion to find in this competition.

Good luck to you too! - Remco 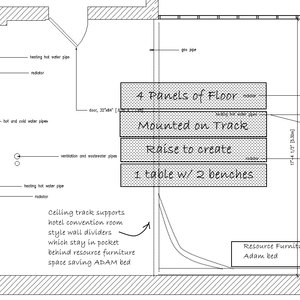 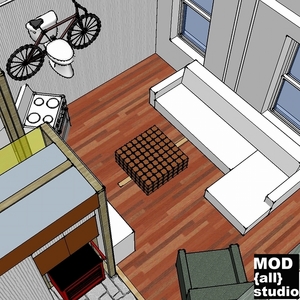 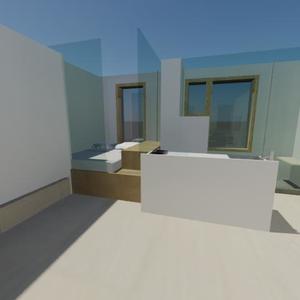 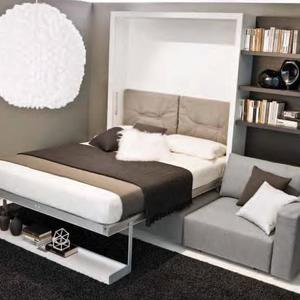