This proposal is for a new concept of urban living that responds to the need for change in the way that we as North Americans occupy space. This need is based on TWO ideas: ONE is a response to the growing virtual world that we are beginning to inhabit more and more actively,

TWO is a response to the densification of cities that, while having good intentions in reducing urban sprawl, leads to a few consequences: subONE unhealthy air quality, subTWO, it creates urban core ecosystems that are

sheltered from the natural environment and removes dwellers from aware of their direct impacts on our planet.

Our proposal is centered on the urgent call to reestablish touch with our tactile environment such that, as virtual connections link urban cores around the world, we do not forget the landscape that is in between them. Each individual must coexist with the environment in such as way that s/he purifies what comes into the household, and ensures that what leaves it is not harmful for the immediate and distant environment. THUS we have designed a green wall filtration zone around the interior perimeter of the apartment in effort to ONE clean the air that comes into the apartment, TWO allow for small scale urban cultivation of greens, and THREE be a sensitive environment that reacts household actions and keeps us accountable of them in order to avoid releasing harmful substances. (for instance) The water system is connected to an irrigation system through the base of the green perimeter walls such that it waters them, but also makes them susceptible to immediate threat if the owner uses harmful chemical products for cleaning.

The next layer to the green perimeter is a glazed room which has all of its furniture stored in an elevated perimeter base. This not only allows for gathering spaces that look onto the green garden around, but also allows for an entirely clear square white space, a clean canvass of 12' x 12'. This space, the empty glazed room is a prism of clean-air, a sound-proof pavilion that, through the use of OLED screens creates holograms of any environment that the inhabitant chooses to download and enjoy by docking their IPOD.

© All rights reserved to: rana

rob
over 9 years ago

rob
over 9 years ago

are you sure have you got enough storage? and all the specific mandatories of the contest?

rob
rob
over 9 years ago

but it's sure a MANIFESTO! congrats!

Margarit Andrei
over 9 years ago

Clark
over 9 years ago

Good concept, nice presentation and renderings. I think your asking a lot the Roomba with these design. Good luck!

ranaowner
Clark
over 9 years ago

Perhaps! but the space is actually only divided in two levels and the Roomba could even clean the shower as there is no separation in the floor - the water is drained through spaces left between the wood flooring. This allows for the shower to be concealed when not used but expand to a decent steam room when taking a shower. Thank you for the comment!

Clark
Clark
over 9 years ago

It was basically a tongue & cheek comment. good work! Best of luck! Thanks for your rely, Cheers!

very nice approach! I just wonder if the buffer zones will be actually used due to the glass separating them from the central space... or will they simply reduce to un-used corridors?

How do the growing walls receive enough light? This space only receives a limited amount of sun, I am unclear on how you propose to maintain their ability to grow in such a space.

David Buckley
over 9 years ago

I would love to live in a place like this. Inspired work, well done!

ranaowner
David Buckley
over 9 years ago

Thank you! Highly considering building this for ourselves after completing this project!!!

michelangelo
over 9 years ago

Finn
over 9 years ago

I like the smart glass. It can make it completely open and privat when needed.

The plants are nice but might call for a complicated setup regarding irrigation and lighting.

The images are amazing congratulations for that, I like the vertical garden as a concept but in reality it will represent a lot of maintenance cost, I don't understan how the dishwasher fits under the sink, the smart glass is the best! a lot of possibilities can be done in your project . Good Luck rana!

Thank you for your comment! As it is always the case, we wished to have had more time on the images to really be more convincing of the idea. Even one of our plans did not load!! Maybe a rendering of the shower/steam-room amidst the garden would have been an interesting shot from the point of view of the shower-er! Or even an exploded axo of how the layers are formed spatially. Its true that generally vertical gardens require some maintenance, but that really depends on the choice of plants. Here the idea was that the irrigation system of the garden would be directly linked to the water system. In this way the plants would get directly fed and would give the inhabitant the responsibility to be accountable for their lifestyle: ex, the products used in the home should be biodegradable so as to not damage the plants. We strongly believe that to incite green living we need to set up living conditions were were are in a direct coexistence with nature again. Though we live in dense urban cores where this is nearly impossible, setting up this sort of system where we benefit our air quality and are able to even grow spices and small fruits in our own apartment without losing the feel of a modern, luxurious, highly transformable urban space, was an idea that we were very obsessed with.

You are right rana, thanks for your response, the air quality given by the garden is unquestionable and as you said coexistence with nature is one of the first steps to green living. It is a shame when you don´t have the time to finish what you have planned ! That happened to me also ! But your images are convincing, at least to me :) I am sure your idea is marked interesting by others, you are doing well in ratings... I have found some valuable features in this project, the best , the sensory feature ... it gives the feeling of virtual reality, that is hard to achieve in architecture .. good luck!

nesma
over 9 years ago

Oh la la. Whats the headroom in this place? Could you have two steps up and still make this legal? Better check on that. Good concept, but doesn't deliver in "reallity".

Yes there is surprisingly enough headroom in this apt for two steps up considering it's an NY apt (unless of-course he is 6'-11")! We thought about it too. With a little imagination and a little ingenuity we think it would deliver in reality:)

nice rendering, but the living/social/meeting room looks smaller than other design becos of the steam room occupied lot of spaces, also the storage area seems not big enough too.

i like the change in elevation/levels and it's interesting that you've put the sleep/lounge space in the middle. it's different but it seems to work and creates a unique space, but what exactly is in the 'urban buffer zone'? and is the bed also used as the seating for the lounge? i might suggest separating them somehow, so guests won't have to sit on your 'bed' when they're over. but you have a creative idea, beautifully presented!

Thank you! The urban buffer zone is the green space around the glass central (gathering) room. Physically, the idea was that as the air comes into the apartment, it would first get filtered through the vertical garden before entering into the central gathering space. Similarly, the apartment offers a urban buffer zone in a more experiential way, as you are able to orchestrate and project your own virtual space within your hologram room. Also, the central gathering space was important to us, as it draws ideas from historical/primitive gathering places where settlement patterns were very much focused on a central event space. The bed could be pulled out to whatever degree preferred, but when it is fully recessed into the kitchen floor, it is sheltered by a wooden bench, so it really depends on the gathering! But you're comment is fair!

Very nice idea. Most projects lack a new concept of living. It deals with the problems of urban living. Good luck.

Love your approach, conceptual enough to allow us to dream.

Your "green wall" is interresting too. To think that we as human invade green spaces (urban sprawl), it makes common sense that the inverse should start happening. On an urban scale, having plants in all units would be a fantastic way to start rebalancing our pollution impact. It'd be fantastic too to be able to live inside a space that feels like the rain forest. Personnal fantasy...

As we look it again and again i think this glass interior is nice.It looks like a house in different levels not a small 39m2 apartament.

Truly original the hologram projection! Also in my project the bed slides under the kitchen. Is a great way to use the space. Very good!

Transformation of this one level space into two level space is not good idea on my opinion, on that way you make less room for space to flow.

Thank you for the feedback!

Actually we feel the opposite:) We feel this space really flows, spatially, visually and given the existing windows on opposite sides, ventilation wise too. And the reason it does is due to adding this step up where we were able to create low modules to store all the programmatic requirements without using the existing walls or creating transformable walls, that end up compartmentalizing the apt hence making it feel smaller than it is. We find that keeping low modules and furniture in a small space really helps with the scale of it.

The result is that the space is very open, flowing and transparant from the moment you walk in instead of feeling like you are walking into a transformable walk-in closet. Apart from the vertical garden surround which we think would add another layer of texture, vertical visual disruption was kept to a minimum which allows the user to enjoy the ambiance of the 'event' space as he wishes to program it virtually on the switch glass or physically.

That was our intention:)

Nice renders and color combination! I like your work!

I agree with svenia about the two-level space, but I like your presentation and your style

Yuriy
over 9 years ago

ranaowner
Yuriy
over 9 years ago

I understand what you mean. However as our world moves closer and closer towards more virtual environments we wanted to find that space hovering between technology (with all the gazillion apps) and maintaining contact with our natural environment in our daily functions. We thought that this would be a good starting point to think about it anyway:) How nice would it be to project an image of a terrace overlooking the sand and sea while you were having dinner! That would definitely cure my winter blues!:) Sometimes illusions are nice!

interesting idea! i love the smart glass and the different levels. good luck. 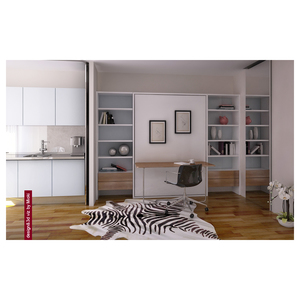 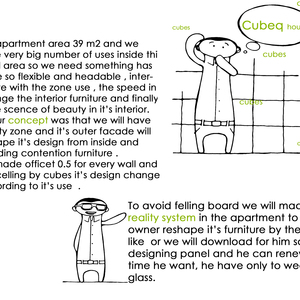 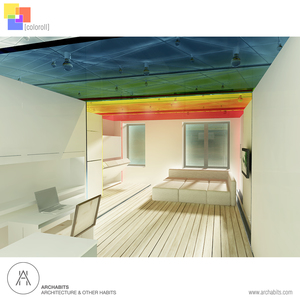 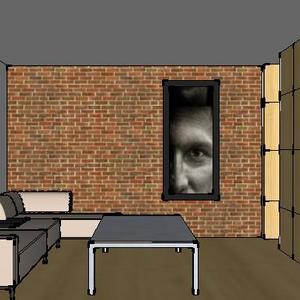