Read the BriefSee all IdeasCreatives
World's Best Workspace
Viewing published ideas, sorted by popularity.
previousoverviewnext
NETWORK IN NATUR
The idea behind the common area (B1) was inspired by the diverse flora and fauna of and nature in Colombia. This idea is emphasized by the quality and characteristics of the space.

The aim was to provide the possibility for users to experience the diversity of nature in Colombia in four floors. For instance experiences such as; spending time in nature, laying down in a hammock surrounded by tall trees or meditating next to a river or lake, studying in a space other than a library, theatrical plays , dancing and sports.

Differences in climatic conditions led to diversity in the characteristics of vegetation and plants.

During the design process I considered local characteristics of Colombian people and their environment. For example trade of coffee, spices, the small and large scale businesses among Colombians, various animal species and flora and fauna, green mountains covered by evergreen tall trees, Volcanoes with their peak covered in snow.

The mentioned features were architecturally embedded in the common areas (B1) in four floors. This is reflected in the composition of voids. Moreover, visual connections and the circulation is designed in a way that integration of different features and floors are evident to users and therefore encourages users to travel through the building and experience spaces with various ambiences and atmospheres.

The large baskets which are used by people in Colombia for carrying stuff are used here to contain trees. These trees act as columns which hammocks are fixed to.

Images were used on some surfaces to represent to the users the experience of being in a forest.

Straws (made from soft plastic and fixed on metal bases) were assembled and used to define spaces and act as doors.

The columns from lower floors transform into hanging ropes which are used for tightrope walking. This transformation of vertical elements is done to represent an integrated architectural design.

© All rights reserved to: Joshua 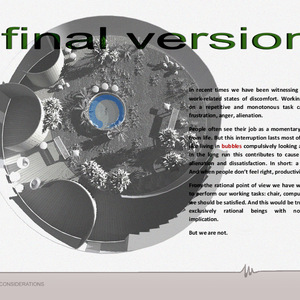 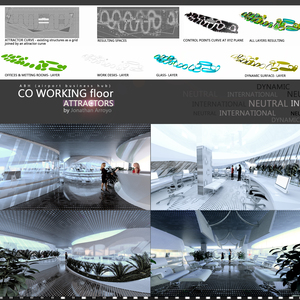 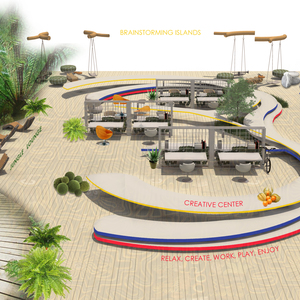 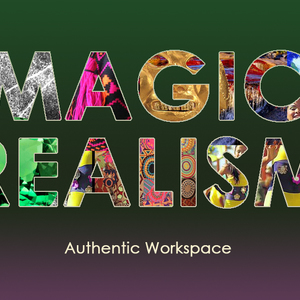