Sustainability - one of the aspect in architecture. It is very important for me and I'm very interesting in it. I think contemporary architecture has to be based on sustainability.
In this project I came with a concept to create simple and in the same time functional object trough ordinary and material at hand. To create a space in trivial urban layer, which will be very cheap and very magnetic for people.
Architectural idea - simple ideas have often been the driving force the evolution of human kind like, for example, the concept of sails, wheels and umbrellas. Today, in an era of complex energy problems, we also need simple solutions to difficult problems. Buildings consume and waste a lot of energy and are constantly exposed to direct sun light whose direction and intensity varies greatly throughout the day. Initial idea to create an adaptive skin responsive to the visitors of a building. Depending of amount and localisation of people in the building in particular spaces the balloons are changing them-self size on the facade for good insolation of the building. To make this facade unstable. It will attract walkers outside. (Adaptive of attract system)
Technical idea - this concept is based on the principle of heat absorbing balloons. Imagine a layer of black balloons covering the whole surface of a building's facade that is able to harvest the sun's energy. The balloons can be filled with water or air to be used for the rooms next to the facade. By regulating the size of the balloons by their filling amount you are also able to control the amount of solar energy that penetrates the facade area.

© All rights reserved to: Maks

thank you for the comment! I will try to develop this idea for sure. To represent a fusion of agents in internal particular spaces.

Would it be an idea to make these images the FIRST images people see? Then follow up with the next slides explaining the concept behind it, but the audience has already bought in to the coolness of it.

Also, this idea can actually be combined with ideas by others.

Thank you AyalPinkus for comment and suggestion I really considered you. Now you can see a changes. And also enjoy a video!)

Cool start. But how would the hotel really help locals and travelers connect?

Thanks!!! I'm gonna to develop this idea with a sensible balloons full over the hotel and interact locals and travelers between each other by this balloons.

jerico
about 8 years ago

Maksowner
jerico
about 8 years ago

Funny inspiration!!! We are waiting for new images about a "functional Hall" full of sustainable balloons! Good job!

Thank you for the input!

really like your video!!! :) Can't wait to see your updates!

bettina79
about 8 years ago

i Can't wait to see your updates!

Maksowner
bettina79
about 8 years ago

I will try to update it asap!

Platina
about 8 years ago

Nice and different approach and video presentation. This would be an eye catcher for sure. Looking forward to the updates, too :)

Olena
about 8 years ago

locis
about 8 years ago

Rainer Kollender
about 8 years ago

i realy realy like the idea but it's in the wrong contest, isn't ?

but so what, i see you are in the top 10, means you go home with good
price-money - that's for sure a good reason why for being in a contest - wrong or right - who cares *- D Congratulation ! *-))

it´s a realy nice idea, could you explain the interaction and communication between people a bit more !

I love how your facade has the ability to show human interaction behind the facade without giving away the explicit details of exactly what those people are doing. This would be great with a light combo inside the balloons, where they get more intense and blow up at the same time at night.

This is one of my favorite ideas! Top 3! Thanks for sharing - your moch up is beautiful.

I would consider using some sort of expandable carbon fabric so people with darts dont get too excited at this opportunity haha. Best of luck to you ~

Gila von Meissner
about 8 years ago

I still have no clue how this is meant to connect travelers and guests?

i understand your idea of connecting the interior or the hotel to the street in an interactive and engaging way...i think it is a subtle way of relating to the brief, and for sure a very interesting approach. good luck and congrats for the good work you put into this!

vanveen
about 8 years ago

I like the idea of the balloons, but how do they make the people interact? I like it though. 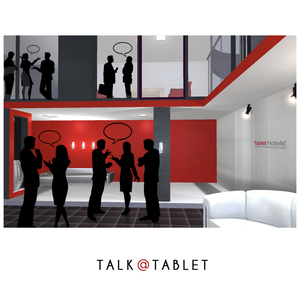 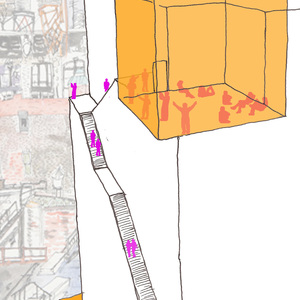 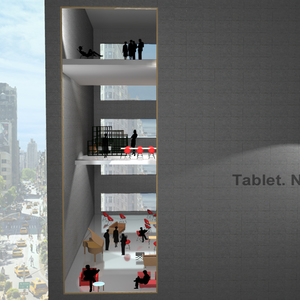 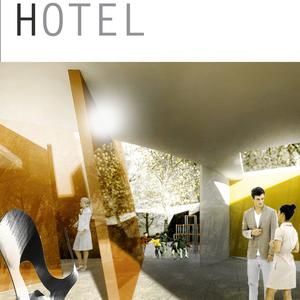