We use what the "deutsche Bahn" can give us. We transform U-Bahn, S-Bahn-Stations and the vehicles into climate-zones. These climate-zones are represented by jungel vegetation. The jungle is the lung of our world. they have a important contribution to our climate. Also jungle vegetation is very attention-grabbing and unseen in the middle Europe Area. The camapign follows by a few steps shown in the following:
1. We decorate Public-Traffic Stations with jungle plants (Visual1). Beside the installation, we see an city-light Poster  saying"climate-zone. on Sept. 17th 2010."The Ad has a very simple look and tells nothing but that this is a climate zone. This will dramatise, that when you use public traffic, you save the climate. Also it will make people curiously.
2. In the second step, we decorate the vehicles inside (Visual2). A few plants only. At the Window tops, we got a sticker, saying: "Climate-Zone. On Sept. 17th 2010. At Main Station Frankfurt."In The same step, the citylight posters change to that new text.
3. In The next step, we put the sticker to bicycles, on busses, Trees, rubbish bins and so on, everything that seems climate friendly (Visual 3 and 4). Also we add text. The stickers and posters  say now: "Climate-Zone. On Sept. 17th 2010. On Main Station Frankfurt. www.Rock-im-Dschungel.de"Also we make Posters, using the same Visual (the palm) to advertise the event, big sponsored by "Deutsche Bahn" for Save the Climate, Save our World. We invite big stars playing a benefiz for an rainforrest projekt of Oro Verde, WWf or something.

4. The Big Event. The Event is Branded by "Deutsche Bahn. The Eco Way." (Visual5). The whole station is decorated with jungle plants, so that you got the feeling to be in the jungle.
Make something good and Talk about.
Additional, we launch an Online Campaign. Banners in Ecological context, showing our Visual and text. Also we open a Facebook-site for "Climate-Zone" showing funny videos of people wondering about the plants, ecological crazy inventions, people having funny ways to save the climate and environment, and of course an explanation, why public traffic is more effective to save the climate, and much more tips. Time after Time, we open our concept and execute the whole idea. "Deutsche Bahn is making Rock in the jungle in the Main Stations of Main Cities in Germany and save the climate, And they want you to do so, too. Make something good and talk about."
The black color in the print examples was chosen, because we don´t want it to iconographic ( green for nature, csr and so on, is too boring and seen a million times). Also we wanted this concept to be as far as possible from the DB CD or something else identifying the DB.
All Pictures are for Layout and visualise the ideas.

© All rights reserved to: herzkammer 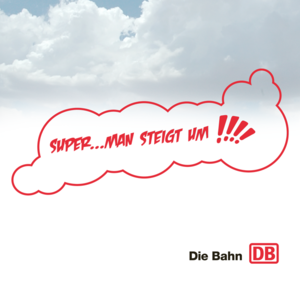 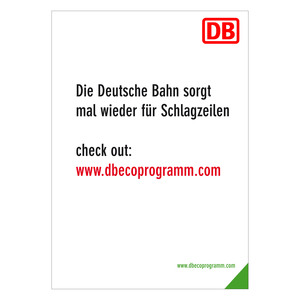 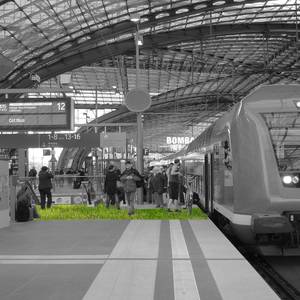 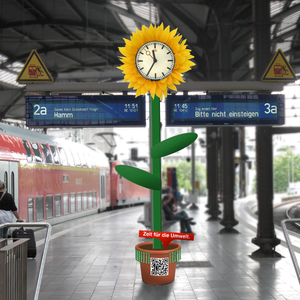