Read the BriefSee all IdeasCreatives
The PENNY Plot.
Viewing published ideas, sorted by popularity.
previousoverviewnext
FirstPenny Stories UPDATE!
3 funny + 2 cute plots for TV spot and 1 crazy for the radio (with special guest star  MC Mali). Dont miss the audio presentation! And don't mind on everything that goes after audio idea, it's old stuff, can't delete it!

Awaited degree day! Gorgeous university graduation ceremony, procession of the academic staff and candidates, the Gaudeamus sounds on the background. Hundreds of students are waiting for a big Congregation. All dressed in academic dresses. They're very nervous and excited (just a few moments and  they will take a step to the new life). Here comes the Chancellor (head of the University), he looks very solemnly.  Complete silence... Everybody's looking forward to hear his traditional welcome speech, everyone are desperately waiting  for these precious words. The seconds becomes long like eternity. Girls are fixing their hair, boys just  wiping sweat off with their snow white handkerchiefs.  Finally the Chancellor says in Latin:

Penny Market : All you need for the party!

The best choice of snacks

Early morning. Somewhere among the desert crowd of people are waiting for something. There�s a lot of journalists, TV cameras and even government� Frankly saying, they�re waiting for a historic event - first contact meeting with the Martians� And here it comes! Oh dear! A big flying saucer is coming down to the Earth! Everyone hold his breath. Flashes from cameras! Extra news, live reports to the every corner of the world. Then amongst the smoke cloud from the saucer the big-brained alien comes out. The President is going towards, he�s ready to welcome guests from the other planet, crowd applauds.  The alien raised his green hand and said something in his strange language. Universal translator announced: "We come in peace!". And then again: "We come in peace!". President is smiling friendly, waits a moment, and then answering: �First to Penny�.

A couple sitting in café. UmaThurman-ish girl and JohnTravolta-like boy:

JohnTravolta-like boy: Did you just order a five-dollar shake?

JohnTravolta-like boy: Can I have a sip of that? I�d like to know what a five-dollar shake tastes like.

UmaThurman-ish girl: Be my guest.

JohnTravolta-like boy: But ya know, I�ve tasted much better one and it costs less than FIVE dollars, cross my heart �

Penny  Market: best milk for the best milkshake! (and it would be less than 5 dollars).

2 cute bonus stories. It should be this kind of TV spots with light sunny picture and amazing music which cause only warm feelings. Usually everybody likes to watch them.

(the music: Misty Miller  �Remember�, or something like this)

Beautiful music, soft warmly light. A little boy only 6 years old sitting in the middle of cozy room. The door to the backyard is open and sunlight shines just on a boy. He�s playing with his favorite toys at the moment: big violet UFO and funny green Martians. Everything goes very calm and slowly. Music is taking you away.

Then we see the question: Do you remember how you get your first money?..

Suddenly the boy stops his game. He put down the toy and tries to touch his front tooth. Then he pull stronger and yay! His front tooth stay in little boy�s fingers. The boy is childly surprised, his big big eyes are shining and we see a big big hole when he�s smiling, the hole where his front tooth used to be.

Next scene: the boy is preparing for a sleep, he dressed in a cute pajamas with lovely colorful milkshakes on it.  Now he�s putting his front tooth under the pillow, that�s why he�s so archly smiling when his mother kissing him goodnight. He closed the eyes. We see him closer (zoom in) and stop on the moment when it�s just his sweet sleeping face on full frame.  After it camera moves back (zoom out), but it�s a sunny morning now. Our boy opens the eyes and first he do � looking under the pillow. And WOW : there�s a shiny coin in place of his tooth!

Text: For you it was the biggest money in the world�

The boy�s mom coming to the room, he�s happily showing her his first money and they�re hugging in tender sunlight.

Text: Do you remember what you bought for it?

In the next scene boy, his mom and dad are walking in Penny market. The boy�s looking for something special, now he has his own money. While parents are busy with their goods, he�s doing his big choice. Our little man standing in front of showcase with cakes and sweets. Everything looks so shiny and tasty. Just do it boy! And finally he takes the chocolate cake... He tastes it and we have no doubts that it�s the best cake in the world for this little boy without one front tooth.

(the music: Misty Miller  �Remember�, or something like this)

Beautiful music, soft warmly light. A big house, where a little 5-years old girl is looking for someone, but everybody in hurry-scurry. Today is her older sister�s graduation day. Everyone�s running around her sister and no one pay attention to this little girl.  So she became angry in this their childish way. She inflated her cheeks and walked away. All she wanted is grandma�s biscuit�

Then we see the question: Do you remember how you get your first money?..

The sun was shining brightly, but our little girl was walking down the street with angry angry face. Looks like she�s hating everyone in this world. There was an old lady next to her. This lady carrying a big package with some goods. Suddenly the package breaks and  green apples fall on the ground. Lady started to pick them, but it was so hard for her, she was very old... The girl nasty looked at old lady and her trouble and... walked away. She�s very angry and upset, she can�t help some old lady with her apples! The girl did a few steps and stops� She thought a while and then quickly came back to the lady. She helped to pick all the apples. Now our girl wasn�t angry anymore. The old lady was happy and amazed too. So she gave one shiny coin to the girl for her first work.

Text: For you it was the biggest money in the world�

Do you remember what you bought for it?

Wow! It was a big moment for the girl! She smiled and looked just like a little miss sunshine. So she ran down the street and now she�s walking through Penny Market. Looking for the thing only she can know.

She walking and walking� And here it is -  fresh tasty biscuit, just like her grandma do! She tried it and it tasted like never before. She will never forget this moment, the moment when she became grown-up.

Once upon a time

on the dark desert street

The rain was beating on her face

And flashes lighted here and there

No cars, no people, even dogs

Just Lucy running on her own�

Then suddenly she heard something

And start to run more than before�

But nothing changed from now on

She has a chaser on the street

Who gets to Lucy rapidly

She jumped and scream

What can be worse?

Because she�s almost where she want

A couple of steps

So sad that FIRST TO PENNY got someone but not her�

Penny Market : you don�t have to run, freshness guaranteed!

© All rights reserved to: Borhes 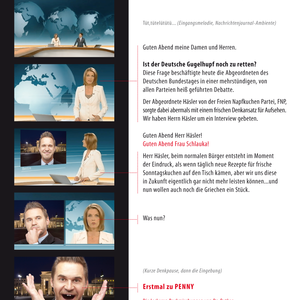 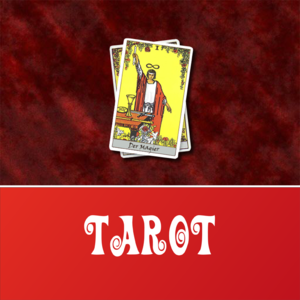 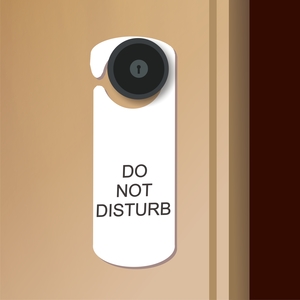 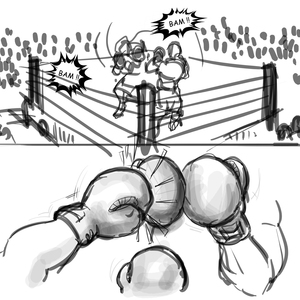